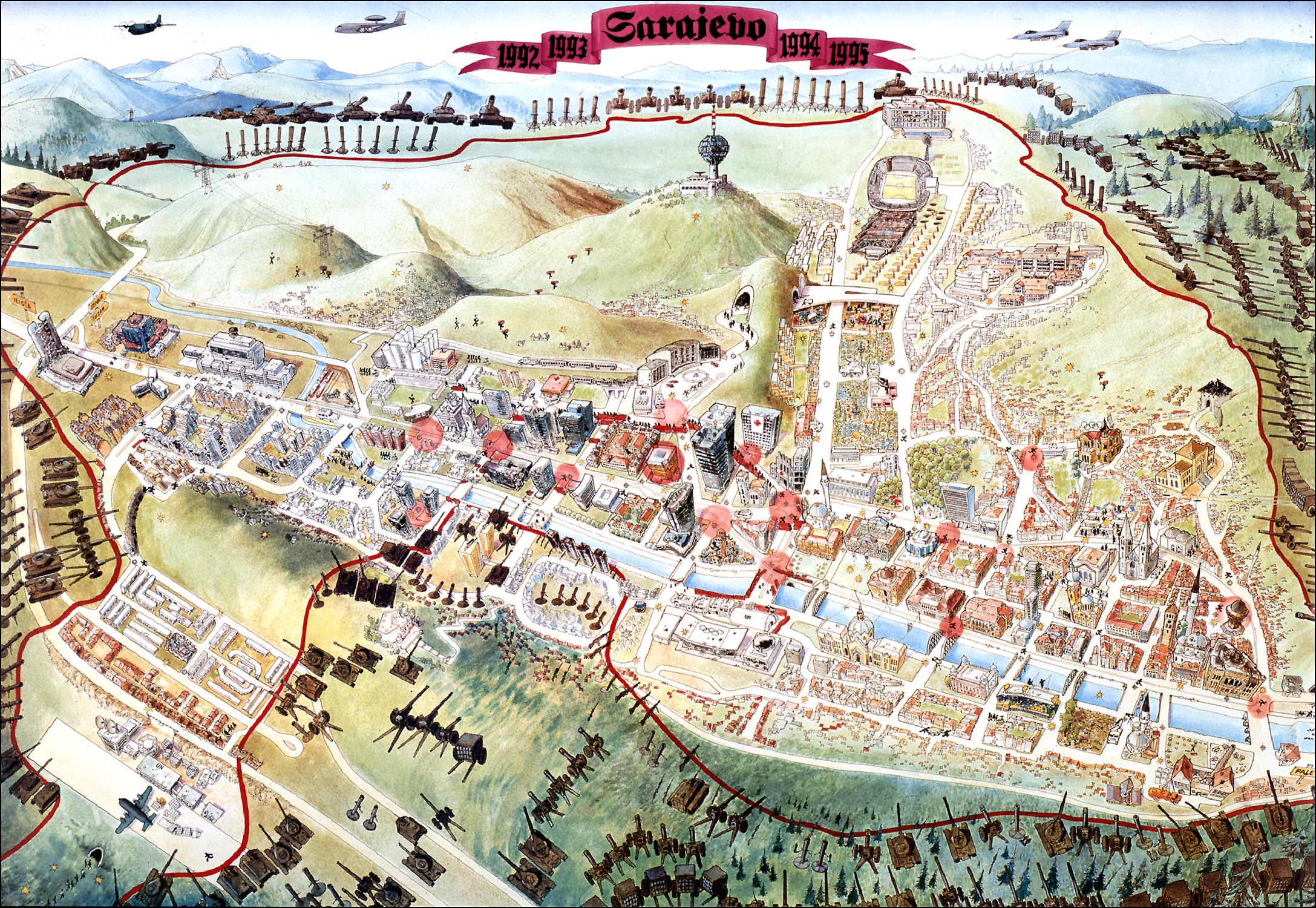 One war had already ended (Slovenia, June 1991) and another was taking place in Croatia. We had already seen the fall of Dubrovnik, Vukovar, and the procession of refugees when the testing of barricades in the city began in Sarajevo and the civil protests erupted because of that on 5 April 1992.

Even though everything indicated that Bosnia and Herzegovina would be next, not many people were able to read the signs of the mass destruction which was to come. Today, after thousands of testimonies, verdicts from The Hague court, books, video archives, and films about that period of the bloody and difficult fall of Yugoslavia, we can see like in a mirror what the April protests meant. A mass of people, emotional, unsettled, angry, opposers of the war and the breakup, yes despite everything, they could not know what they were up against. A massive strategy and destruction plan began during those protests with shots fired by the supporters of the SDS and paramilitary units of Bosnian Serbs from a hotel and from a hilltop, who aimed at the mass of people, leaving the city undefended and empty.

Thus, the civil peace protest clashed with the concrete slab of the four years of destruction to come.

It is certainly important to know for the historical study of former Yugoslavia and the beginnings of four wars that the citizens, or a part of them, wanted something else, while their cruel adversaries allowed them to express themselves and then removed them with satisfaction. Darkness did not descend all at once, there was a day of revolt when those who were different made their appearance, but there were emotions there, humanism, and love towards the homeland, which stood against the future killings, concentration camps, purges… 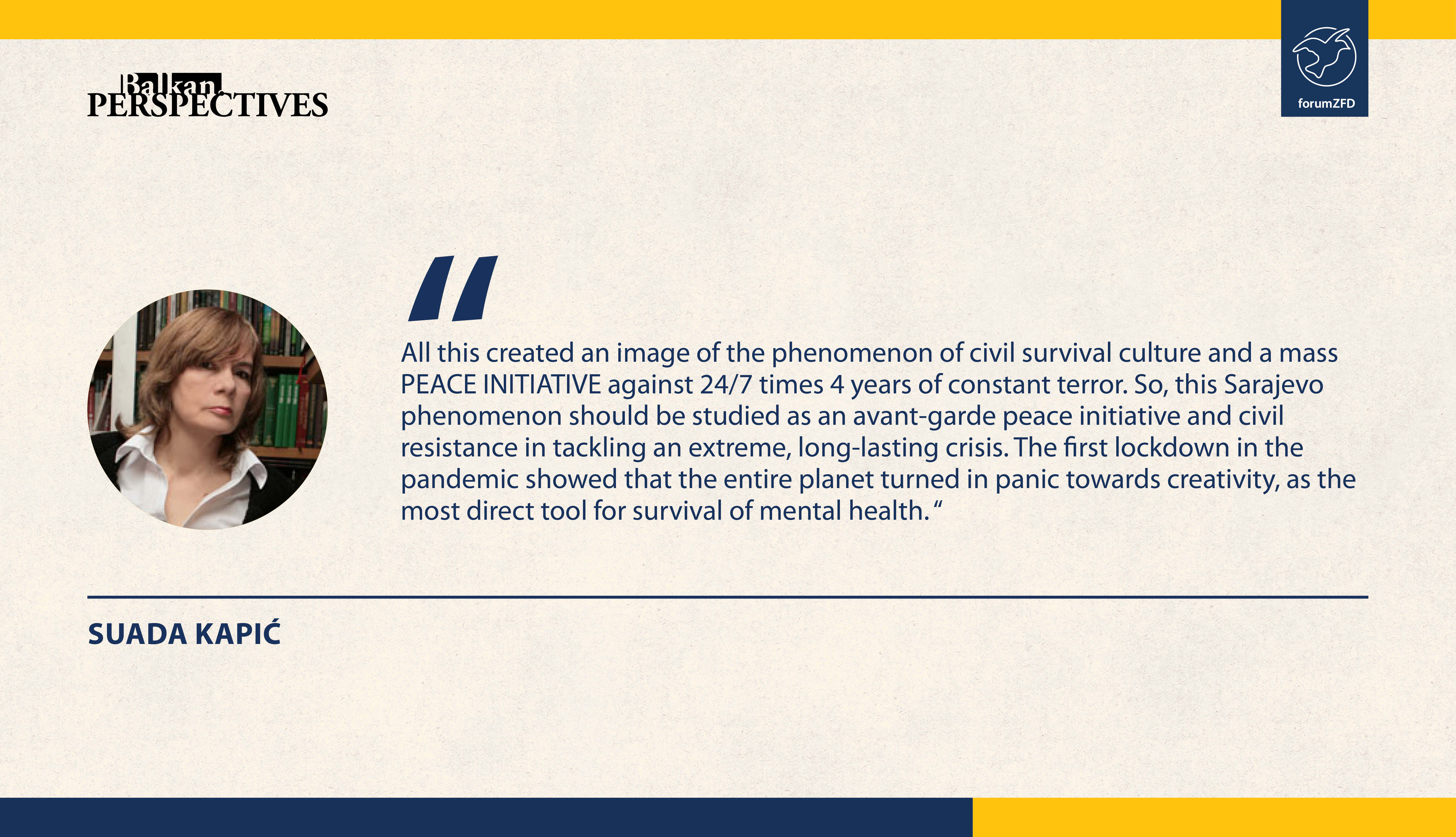 The city was closed for four years. The citizens were hunted down by snipers and grenades. They were left without food, water, electricity, heating, transportation... The invisible enemy from the hills was killing the city by all those means.

After the initial shock, the citizens of Sarajevo adapted to the abnormal circumstances and a revolutionary transformation occurred: every person lived their own little resistance to unimaginable terror, while their creativity and intelligence preserved their mental health, and with the strength of their spirit they created a spontaneous civil resistance toward that terror from the hills.

Someone planted vegetables in the garden (under sniper fire), someone shared their water with the flowers, someone played the piano, someone organized a film festival, someone built a Bosnian house out of rubble, someone wrote a book by candlelight, someone staged the play “Hair”, someone built “The Fighting Centaurs”, placed them on the  tram platform and drove them around town (under sniper fire and grenades), someone taught group of  kids at home, someone graduated from university, someone made posters, taught a dance school, athletes practiced for international competitions…

All this created an image of the phenomenon of civil survival culture and a mass PEACE INITIATIVE against 24/7 times 4 years of constant terror. So, this Sarajevo phenomenon should be studied as an avant-garde peace initiative and civil resistance in tackling an extreme, long-lasting crisis. The first lockdown in the pandemic showed that the entire planet turned in panic towards creativity, as the most direct tool for survival of mental health.

That image of the citizens of Sarajevo opposing the invisible killers on the hills surrounding the city set in motion many actions, protests, and demonstrations all over the world. Sarajevo became one of the synonyms of suffering and spiritual and cultural resistance. All those actions had an indirect influence on the public opinion in a world which demanded that their leaders and politicians take action and finally do something.

It is important to mention that the anti-war movement in Belgrade - the snake’s den - was very significant and had a long-lasting influence on the fall of the regime of Slobodan Milošević. Their visits to Sarajevo during the four years of the siege helped people there feel they were not alone.

One day, researchers will measure the extent of all the actions conducted by the anti-war movement in Belgrade: panels, conferences, books, exhibitions, plays... the influence of all those actions was long-lasting and can still be felt today. We should never say that it was all in vain, that words and images and truth and justice cannot stand against force, murder, and concentration camps.

Light must stand against the darkness, and only perseverance can show which side is stronger.

What we must learn in the third millennium (as the historian Branka Prpa always emphasizes, we entered late into the third millennium) is that we live now in different times and that the pandemic has shown us the weakness and incapability of the entire planet and that the means by which we oppose violence, populism and growing fascism must have both short-term and long-term tools, because there is no more time.

Peace initiatives and civil activism and civil society must have a serious strategy. We are not in good hands, and our planet's time is running out. We should not change the title and meaning of peace actions, but we should come up with a SMART strategy (I know Svjetlana Nedimović, who, in my opinion,is a great example of an activist philosopher for these times). She managed to organize several civil actions with her small group, which were of vital importance for the city. She is a strategist. One of her actions was WATER FOR THE PEOPLE! which was both a manifest for the preservation and the defence of the waters of Bosnia and Herzegovina. She revealed to me the most important tool for an activist of the third millennium.

At the end of the 20thcentury, we have shown that an entire city can make a spontaneous resistance to terror of all kinds (Sarajevo will not fall!) through creativity, intelligence, and humour. We witnessed the end of the siege, so from this day in 2021 and onward we should add the most important tool: thought through in detail this time, an innovative, brave STRATEGY for every themed action, because the planet is in a crisis like never before: a pandemic, climate change, populism, terror, hate speech on social media, growing fascism...

This is why individuals and groups must be completely equipped and persistent in the fight for all kinds of social challenges.

Suada Kapić was born in Sarajevo, Bosnia and Herzegovina. She graduated at the Faculty of Philosophy in Sarajevo and the Faculty of Dramatic Arts in Belgrade, Department of Directing. She is the editor and co-author of the FAMA collection and FAMA archives, whose research covers the period of the wars during the breakup of former Yugoslavia 1991-1999 (topics covered in encyclopaedias, maps, speech history, guides, visual archives, chronologies, albums, documentaries, exhibitions). FAMA projects and archives have been transferred in digital format to the domain of the FAMA collection, a virtual knowledge bank for future generations. Nowadays, Suada is working with the FAMA team on a multimedia project, “Time is Up-Ahead of Fear”, exploring regional / global issues that require collective solutions.