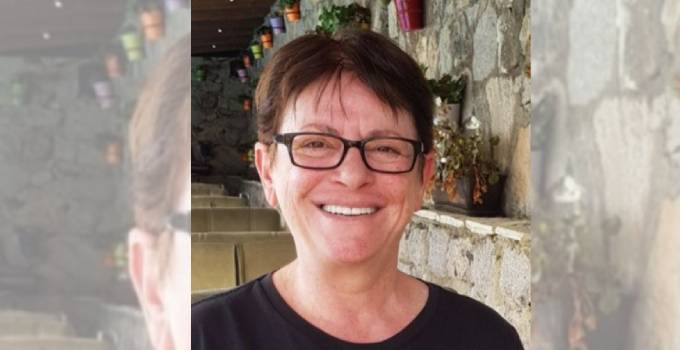 Women’s Protests in the 1990s in Kosovo: The Story of Igo Rogova

For several years, Albanians faced continuous occupation and violation of the rights to work, freedom of language, gathering, music, and moving. However, this became worse under the oppressive policies of Milošević’s regime. In 1998, the situation went from bad to worse. The Serbian police and armed forces started massacring civilians, raping women, burning villages, and perpetrating other crimes in Kosovo. Amid this situation, the Albanians continued their efforts towards a peaceful resistance.

Following the massacres against civilians - including women and children in Drenica - a group of women activists from the civil society and from the Democratic League of Kosovo (LDK) decided that we had to do something. We needed to bring international attention to the situation, in order to achieve a peaceful intervention that would prevent a full-fledged war and further suffering. We also wanted our basic right to live peacefully to be restored. 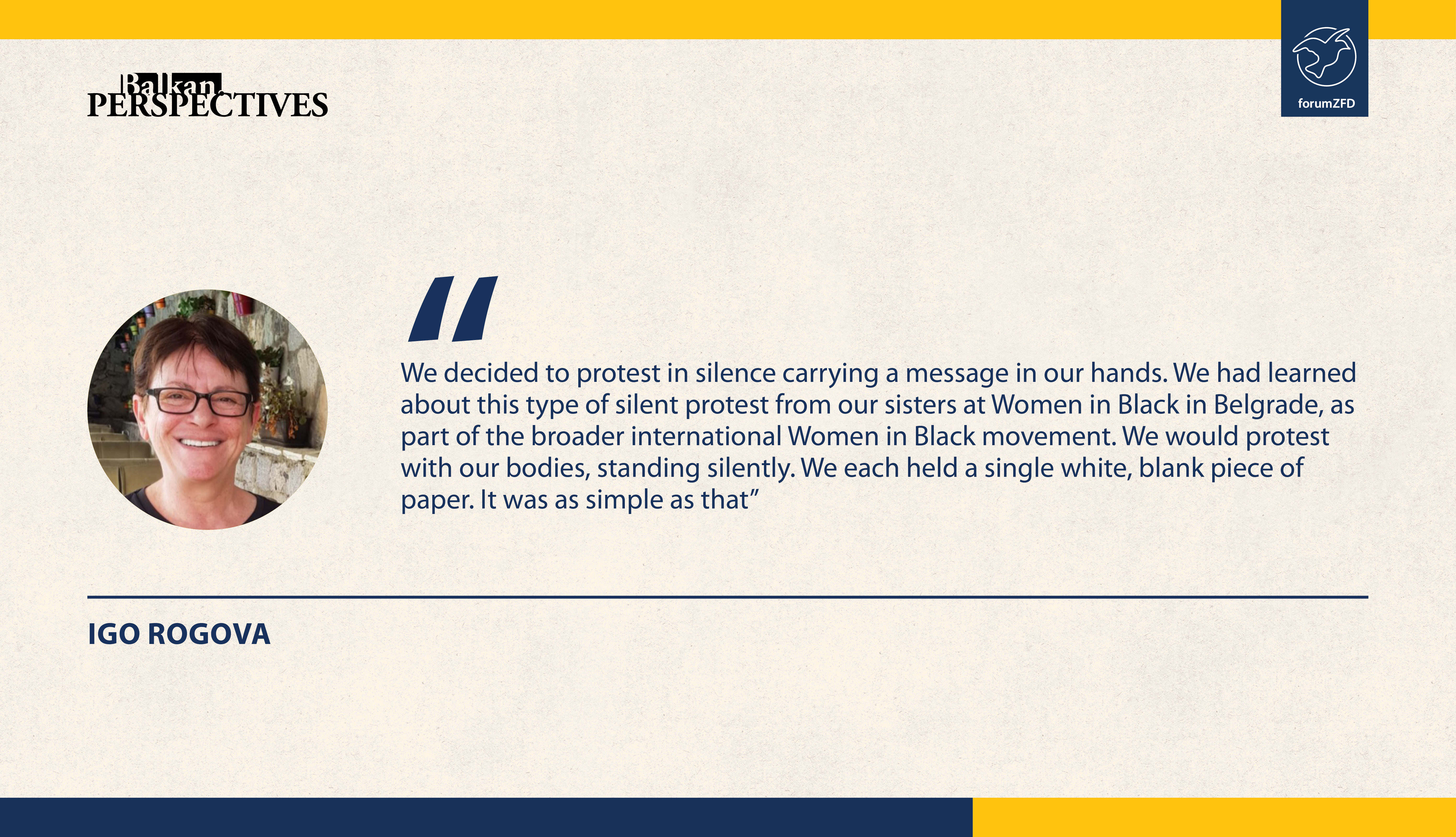 To this end, 12 women’s rights organizations and representatives of the Women’s Forum within LDK gathered at the Centre for Protection of Women and Children. Back then, it was very dangerous to gather with the purpose of organizing any activities or demostrations. From time to time, Serbian snipers had been positioned across the street from the Centre. We had to be very careful even meeting to discuss organizing, as organizers were regularly imprisoned and tortured. I still remember this hidden door inside the Centre. It was almost invisible. That secret door led to the basement of the Centre where we gathered to talk in hiding, following the massacres in Drenica: “What are we going to do now?”

From Passive Resistance to Peaceful Protests

Until then, we had been resisting peacefully, but passively, as Howard Clark wrote in his book on Civil Resistance in Kosovo. With our decade of passive resistance, the world was still unaware of what was actually happening in Kosovo. Or, if they were, they were not doing anything to address the situation. We knew we had to do something before the massacres spread, war escalated, and more people died. The passive resistance policy of LDK leadership was no longer enough. Even though the LDK leadership had told us not to organize anything publicly as it would be very dangerous, eventually we all agreed that we needed to organize a protest, to raise our voices, to let people around the world know what we were going through. During that meeting, we came up with the idea to protest on 8 March, the International Women’s Day. I would say that this marked the first protest we ever held on 8 March, though we would have several in the following years. The protest was not so much about gender equality as it was for demanding the most basic human rights for us, as women, but also for men.

We decided to protest in silence carrying a message in our hands. We had learned about this type of silent protest from our sisters at Women in Black in Belgrade, as part of the broader international Women in Black movement. We would protest with our bodies, standing silently. We each held a single white, blank piece of paper. It was as simple as that. We agreed on that because we had already said every word there was to be said. There was nothing left to say. One side of the white paper symbolised peace, while the other blank side gave the message that we had no rights. We did not have any basic rights. Even the rights we were supposed to have were being violated. So, we did not write anything. Both sides of the white paper were blank. It was a powerful message, but the way how we, the women, organized ourselves, was even more powerful.

At that time, there were no free media. But there were international media present in Kosovo broadcasting in the Albanian language, such as Radio Free Europe, Deutsche Welle, and the Voice of America. They helped us by publicizing and covering the protest.

The protest on International Women’s Day 1998

Some 5,000 women gathered in front of the Cultural Center of America, which at that time sort of played the role of the U.S. Embassy. The image of what we witnessed that day will never leave my mind. Thousands of women holding white papers, all in silence, with only the sound of the papers in the breeze. Powerful. We were completely surrounded by Serbian snipers on the rooftops, observing us. It was very frightening. But we were 5,000 women there, and that was our strength, our energy that kept fear away. When we finished, we had agreed that no woman would leave the group alone because we had to protect ourselves on the way home. We dispersed in small groups of ten women. We felt safer together.

The protest was covered by the most prestigious media, as it was one of the largest protests organized by women. After that demonstration, the regime of Milošević could not easily deny what was happening in Kosovo.

We knew though that this was not enough, and that we should not stop protesting until someone would do something more to put an end to our suffering. We heard words but saw no actions. We were very concerned about the people of Drenica who were living in terror at that time. Serbian forces were spread all over the region, and innocent people, women, children, and elders, were being killed. They were trapped there, suffering without access to food.

Some days later we decided to organize another demonstration, specifically on 16 March. Again, we met in secret in the basement of the Centre, discussing what to do. We agreed to carry a loaf of bread in our hands and to march to Drenica, to bring bread to the people who were isolated there, symbolically but also in reality.

The courage of women was amazing! I still get emotional when I remember women’s fearless willingness, no matter the consequences, to stand up. On the morning of 16 March, we met at the Cultural Center of America again, and we started our march towards Fushë Kosova, on the way to Drenica. As we marched from Prishtina, the Serbian police followed us the entire time. It was early spring and windy. However, one could not notice the wind and the cold when surrounded by such as crowd of ten thousand women, girls, and a few men who joined us. When we arrived in Fushë Kosova, almost six kilometres from Prishtina, we saw that the Serbian Police had formed a cordon blocking the road. They would not let us pass. I remember Edita Tahiri yelling at them: “Drenica needs food!” They did not pay attention and they refused to move. The organizers discussed whether we should attempt to press forward but, as they were in full riot gear, we decided that it was too risky. Eventually, after standing and shouting there for a while, we decided that we did not have any choice but to return to Prishtina.

On our way back, we went to the International Red Cross office in Prishtina and left the loaves of bread outside their office. That was also a symbolic act, letting them know that they should have been the ones carrying food to people in need in Drenica.

Then, we continued on to the Cultural Center of America. Some of us met inside with American officials. We began chanting softly “Bread for Drenica”. We were surrounded and threatened by the Serbian police the entire time. But the chanting became stronger and louder anyway. We succeeded in bringing international attention to what was happening in Kosovo, especially through the media. The pictures from that powerful march went around the world, making international actors more conscious and aware that a scenario similar to Bosnia and Herzegovina was happening in Kosovo. I believe that even though we were stopped from carrying the bread to Drenica, we did carry hope. We contributed to bringing international attention to our plight, and to encouraging an eventual intervention.

Igballe (Igo) Rogova is the Executive Director of the Kosovo Women's Network (KWN). She has more than 30 years of experience advocating for women's human rights at municipal, national, and international levels. In 1989 she co-founded one of the first women's rights organisations in Kosovo, the Motrat Qiriazi Association for the eradication of illiteracy. In 2000 she supported the establishment of the Kosovo Women's Network (KWN). Rogova is one of the founders of the Women's Peace Coalition of activists in Kosovo and Serbia, and the Regional Women's Lobby for Peace and Security in South East Europe. She has contributed to the passage of several laws and policies towards furthering gender equality in Kosovo.