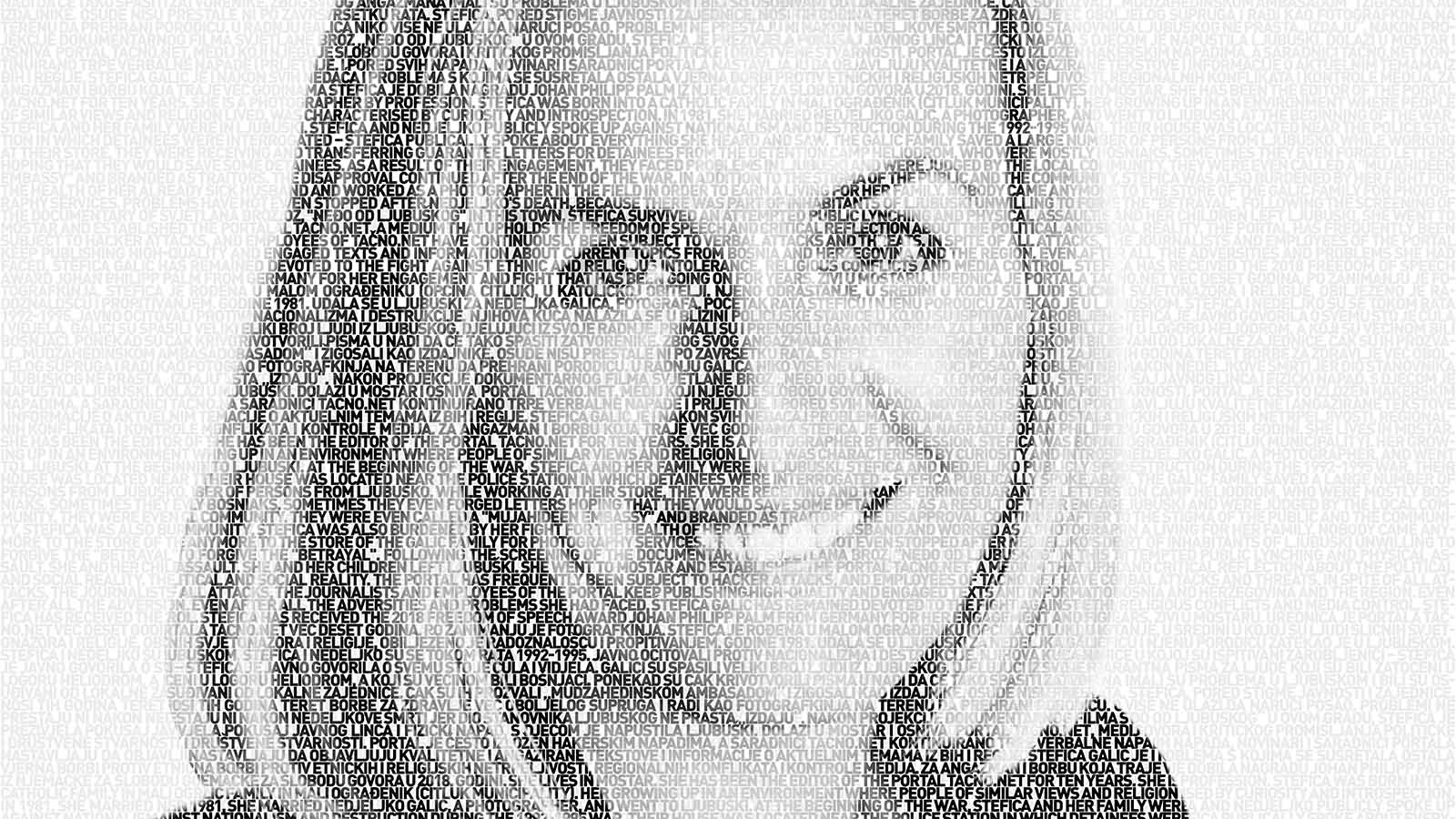 She lives in Mostar. She has been the editor of the portal Tačno.net for ten years. She is a photographer by profession.

Štefica was born into a Catholic family in Mali Ograđenik (Čitluk municipality). Her growing up in an environment where people of similar views and religion lived, was characterised by curiosity and introspection. In 1981, she married Nedjeljko Galić, a photographer, and went to Ljubuški. At the beginning of the war, Štefica and her family were in Ljubuški. Štefica and Nedjeljko publicly spoke up against nationalism and destruction during the 1992-1995 war. Their house was located near the police station in which detainees were interrogated – Štefica publically spoke about everything she heard and saw. The Galić family saved a large number of persons from LjubuškI. While working at their store, they were receiving and transferring guarantee letters for detainees from the detention camp Heliodrom, who were mostly Bosniaks. Sometimes they even forged letters hoping that they would save some detainees. As a result of their engagement, they faced problems in Ljubuški and were judged by the local community. They were even called a "mujahideen embassy" and branded as traitors. The disapproval continued after the end of the war. In addition to the stigma of the public and the community, Štefica was also burdened by her fight for the health of her already sick husband and worked as a photographer in the field in order to earn a living for her family. Nobody came anymore to the store of the Galić family for photography services. Problems have not even stopped after Nedjeljko’s death, because a part of inhabitants of Ljubuški was unwilling to forgive the "betrayal". Following the screening of the documentary of Svjetlana Broz, "Neđo od Ljubuškog" in this town, Štefica survived an attempted public lynching and physical assault. She and her children left Ljubuški.

She went to Mostar and established the portal Tačno.net, a medium that upholds the freedom of speech and critical reflection about the political and social reality. The portal has frequently been subject to hacker attacks, and employees of Tačno.net have continuously been subject to verbal attacks and threats. In spite of all attacks, the journalists and employees of the portal keep publishing high-quality and engaged texts and information about current topics from Bosnia and Herzegovina and the region. Even after all the adversities and problems she had faced, Štefica Galić has remained devoted to the fight against ethnic and religious intolerance, religious conflicts and media control. Štefica has received the 2018 freedom of speech award Johan Philipp Palm from Germany for her engagement and fight that has been going on for years.

The war started. Everything became different. What made us different was the fact that we stayed true to our principles, both Neđo and me, on our path of antifascism and left-wing orientation. We never spoke about ethnicity in our house, my children have never been baptised, nobody went to church. We all were afraid of the war. However, it all became true. There was an Ustasha and fascist idea simmering beneath it, which people had been carefully hiding, and it all erupted all of a sudden. Our troubles began at the beginning of 1990s. We openly protested against everything that was not normal. We were absolutely openly vocal against it. We tried freeing people from detention camps after they had been taken away. I saw it all from the balcony of my house. People were horrified, they were crying. I was screaming. We were absolutely shocked. There is nothing similar in my life than watching these lorries leave. I can never forget that scene. Horror, nothing else.”