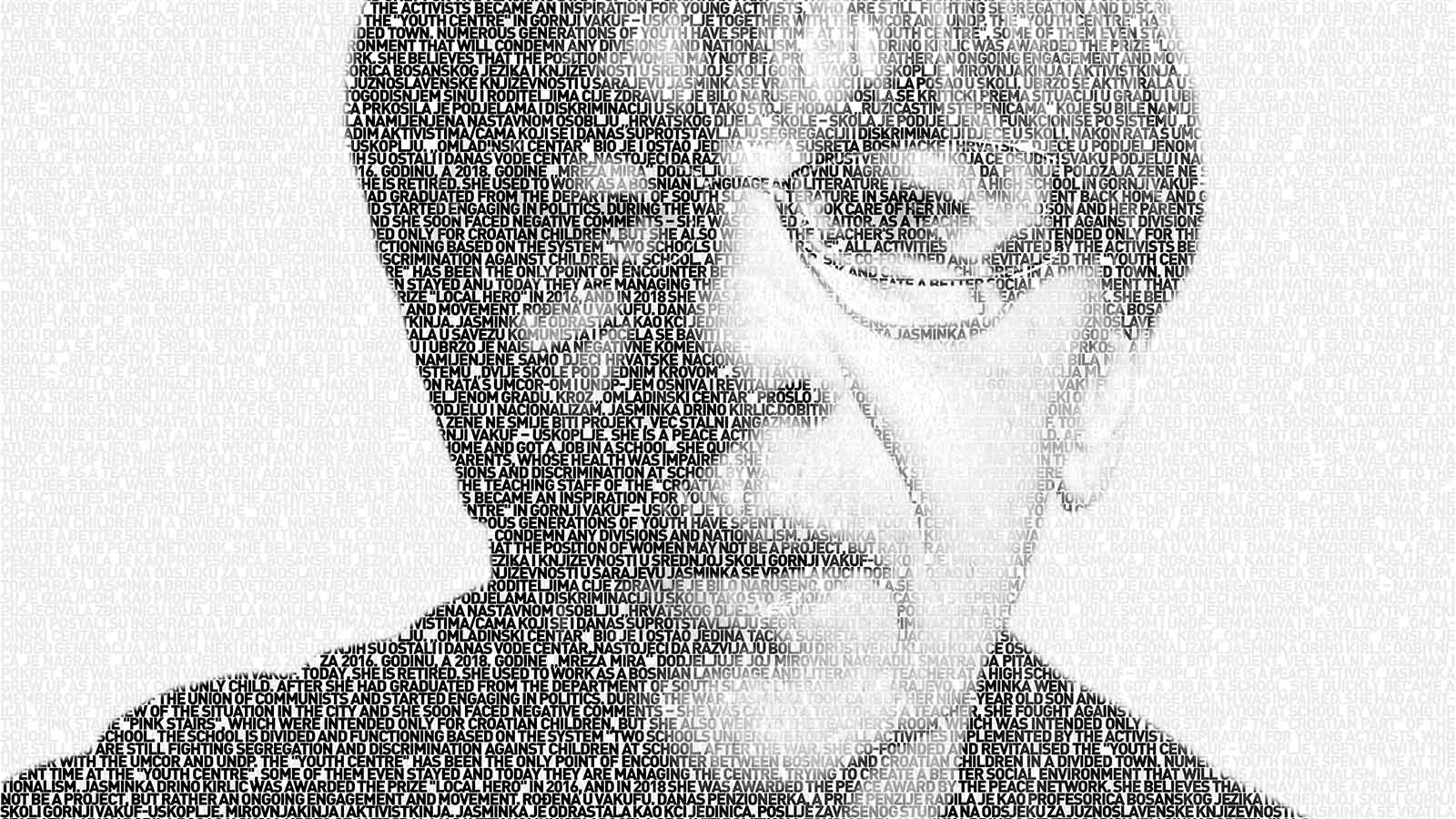 She was born in Vakuf. Today, she is retired. She used to work as a Bosnian language and literature teacher at a high school in Gornji Vakuf – Uskoplje. She is a peace activist.

Jasminka grew up as an only child. After she had graduated from the Department of South Slavic Literature in Sarajevo, Jasminka went back home and got a job in a school. She quickly became a member of the Union of Communists and started engaging in politics. During the war, Jasminka took care of her nine-year old son and her parents, whose health was impaired. She had a critical view of the situation in the city and she soon faced negative comments – she was called a traitor. As a teacher, she fought against divisions and discrimination at school by walking up the "pink stairs", which were intended only for Croatian children, but she also went to the teacher’s room, which was intended only for the teaching staff of the "Croatian part" of the school. The school is divided and functioning based on the system "two schools under one roof". All activities implemented by the activists became an inspiration for young activists, who are still fighting segregation and discrimination against children at school. After the war, she co-founded and revitalised the "Youth Centre" in Gornji Vakuf – Uskoplje together with the UMCOR and UNDP. The "Youth Centre" has been the only point of encounter between Bosniak and Croatian children in a divided town. Numerous generations of youth have spent time at the "Youth Centre", some of them even stayed and today they are managing the Centre, trying to create a better social environment that will condemn any divisions and nationalism.

Jasminka Drino Kirlić was awarded the prize "Local Hero" in 2016, and in 2018 she was awarded the Peace Award by the Peace Network. She believes that the position of women may not be a project, but rather an ongoing engagement and movement.

“Get educated! Education, education. Even if you do not have an opportunity to go to school, you can find an opportunity, you can ask. So, do not tell me that you cannot. You can!”

“I got this photo from a friend from England, a peace keep-er. We met a long time ago. He found it somewhere in an an-tique shop, it is not recent. There is a girl next to water, and water is a very strong symbol in my opinion – it is always alive. The girl is about to jump over the water. She has a petticoat, but her skirt is raised high. She also has a cap on her head. She is holding a hand over the cap in order to prevent it from falling down. The girl has a beautiful ballet-like swing and is real-ly high above the ground. A leg seems to be touching the ground, but the other does not. There is some-thing uninhibited and liberating about that photo. She keeps one of her arms away from the body, but her other hand is on the cap. Her fist is clenched, which is a sign of strength and a symbol in my opinion. I have been keeping this photo in a frame next to my books for years and am always looking at it.”