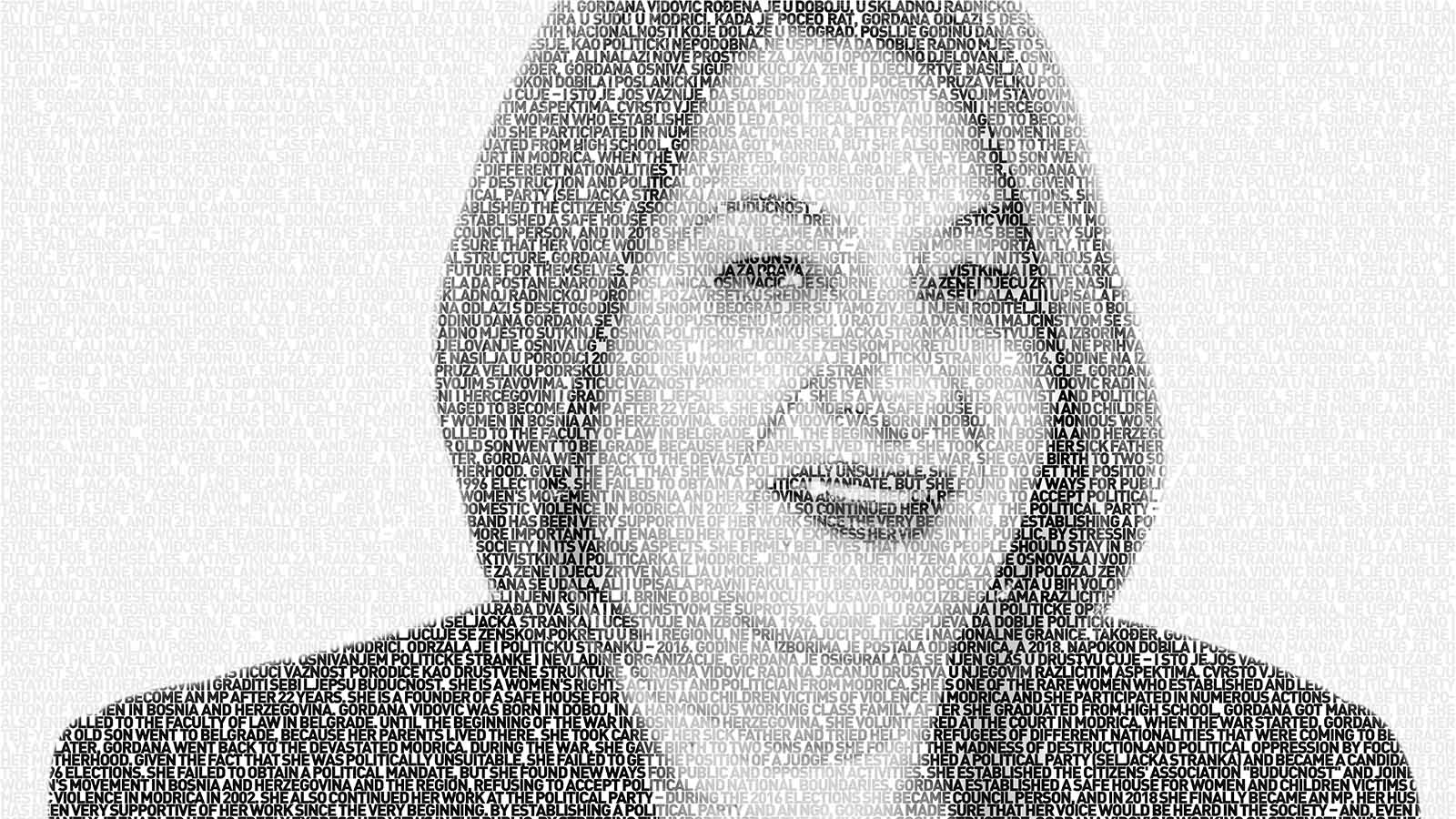 Gordana Vidović was born in Doboj, in a harmonious working class family. After she graduated from high school, Gordana got married, but she also enrolled to the Faculty of Law in Belgrade. Until the beginning of the war in Bosnia and Herzegovina, she volunteered at the Court in Modriča. When the war started, Gordana and her ten-year old son went to Belgrade, because her parents lived there. She took care of her sick father and tried helping refugees of different nationalities that were coming to Belgrade. A year later, Gordana went back to the devastated Modriča. During the war, she gave birth to two sons and she fought the madness of destruction and political oppression by focusing on her motherhood. Given the fact that she was politically unsuitable, she failed to get the position of a judge. She established a political party (Seljačka stranka) and became a candidate for the 1996 elections. She failed to obtain a political mandate, but she found new ways for public and opposition activities. She established the citizens’ association "Budućnost" and joined the women’s movement in Bosnia and Herzegovina and the region, refusing to accept political and national boundaries. Gordana established a safe house for women and children victims of domestic violence in Modriča in 2000. She also continued her work at the political party – during the 2016 elections she became council person, and in 2018 she finally became an MP. Her husband has been very supportive of her work since the very beginning.

By establishing a political party and an NGO, Gordana made sure that her voice would be heard in the society – and, even more importantly, it enabled her to freely express her views in the public. By stressing the importance of the family as a social structure, Gordana Vidović is working on strengthening the society in its various aspects. She firmly believes that young people should stay in Bosnia and Herzegovina and build a better future for themselves.

“We broke down some taboos. We are continuing our work on breaking down even more taboos. What we are leaving as a legacy for the next generations is for them to continue our work, but in a much more intense and stronger manner. I believe that we have created a basis to build on and that the public institutions and the education system respect gender equality principles to a much higher degree. We had to fight for it on our own, and the next generation has to do the same. Nobody may leave their situation to chance. Everyone has to fight for themselves.”

“I got this ring from my husband more than 40 years ago. I never take it off, except for the fact that I sometimes move it from one hand to the other. It is above all the merit of my husband that today I am everything I am and without him I would have never become complete. I can confide in him. He knows my secrets. He knows how to tell me his opinion. Although I am the one taking a decision in the end, his opinion matters very much. He helps me to resolve problems in a simple way.”