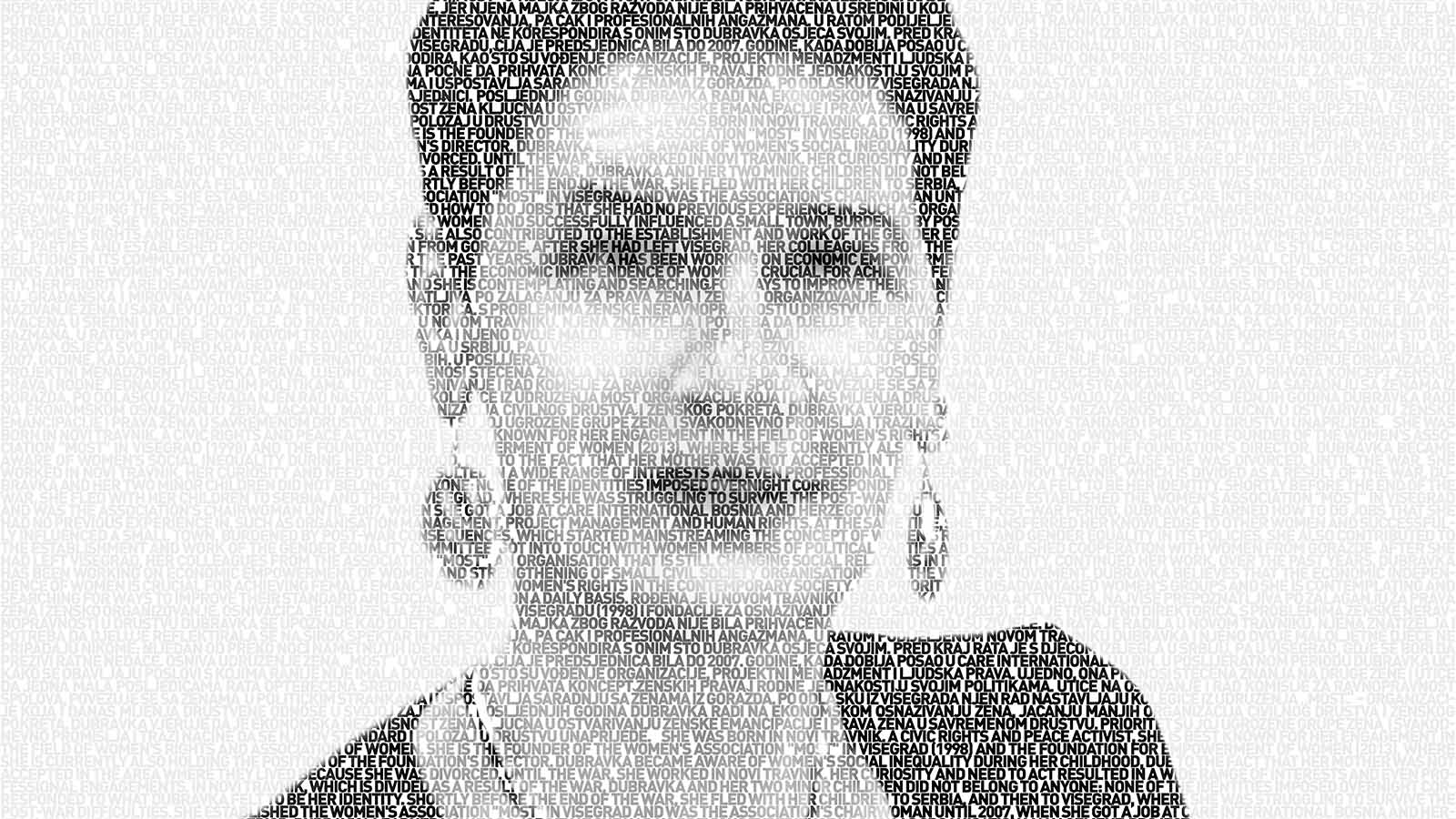 She was born in Novi Travnik. A civic rights and peace activist, she is best known for her engagement in the field of women’s rights and association of women. She is the founder of the women’s association "Most" in Višegrad (1998) and the Foundation for Empowerment of Women (2013), where she is currently also holding the position of the foundation’s director.

Dubravka became aware of women’s social inequality during her childhood, due to the fact that her mother was not accepted in the area where they lived because she was divorced. Until the war, she worked in Novi Travnik. Her curiosity and need to act resulted in a wide range of interests and even professional engagements. In Novi Travnik, which is divided as a result of the war, Dubravka and her two minor children did not belong to anyone: none of the identities imposed overnight corresponded to what Dubravka felt to be her identity. Shortly before the end of the war, she fled with her children to Serbia, and then to Višegrad, where she was struggling to survive the post-war difficulties. She established the women’s association "Most" in Višegrad and was the association’s chairwoman until 2007, when she got a job at Care International Bosnia and Herzegovina. During the post-war period, Dubravka learned how to do jobs that she had no previous experience in, such as organisation management, project management and human rights. At the same time, she transferred her knowledge to other women and successfully influenced a small town, burdened by post-war consequences, which started mainstreaming the concept of women’s rights and gender equality in its policies. She also contributed to the establishment and work of the gender equality committee, got into touch with women members of political parties and established cooperation with women from Goražde. After she had left Višegrad, her colleagues from the association "Most", an organisation that is still changing social relations in its community, continued her work. Over the past years, Dubravka has been working on economic empowerment of women and strengthening of small civil society organisations and the women’s movement.

Dubravka believes that the economic independence of women is crucial for achieving female emancipation and women’s rights in the contemporary society. Her priority are disadvantaged women’s groups and she is contemplating and searching for ways to improve their standard and social position on a daily basis.

“We always have new generations and we are learning all the time. Women have to know where they are standing, how they got there, where their suffrage is coming from, what they can do, what can move women in Bosnia and Herzegovina and what we have in common.”

“This is a photo with an old woman, Nezira Selak. The first time I saw her was in the middle of the ruins of her old home, with her scarf over her mouth. She had a blanket from the UN Protection Forces draped over her neck, standing in the middle of the ruins, with only one room intact. I asked her: What is it? And she said: Well, in order to prevent snakes from coming into my mouth, because I sleep here, and these are ruins. Back then there was an international organisation wishing to help returnees by financing greenhouses. I told them: There is an old woman, Nezira, who sleeps with a scarf on her mouth, and nobody is willing to build her a home. And they did build a home for my Nezira. And she said: This is my room, the other one is Dubravka's room. We did not stay in touch after I came to Sarajevo. Her daughter managed to find me. She told me that her mother wanted to see me. When I saw her, Nezira was unable to stand up from bed. It was over. She told me that she refused to eat for days until they found me. That was the moment we took the picture.”