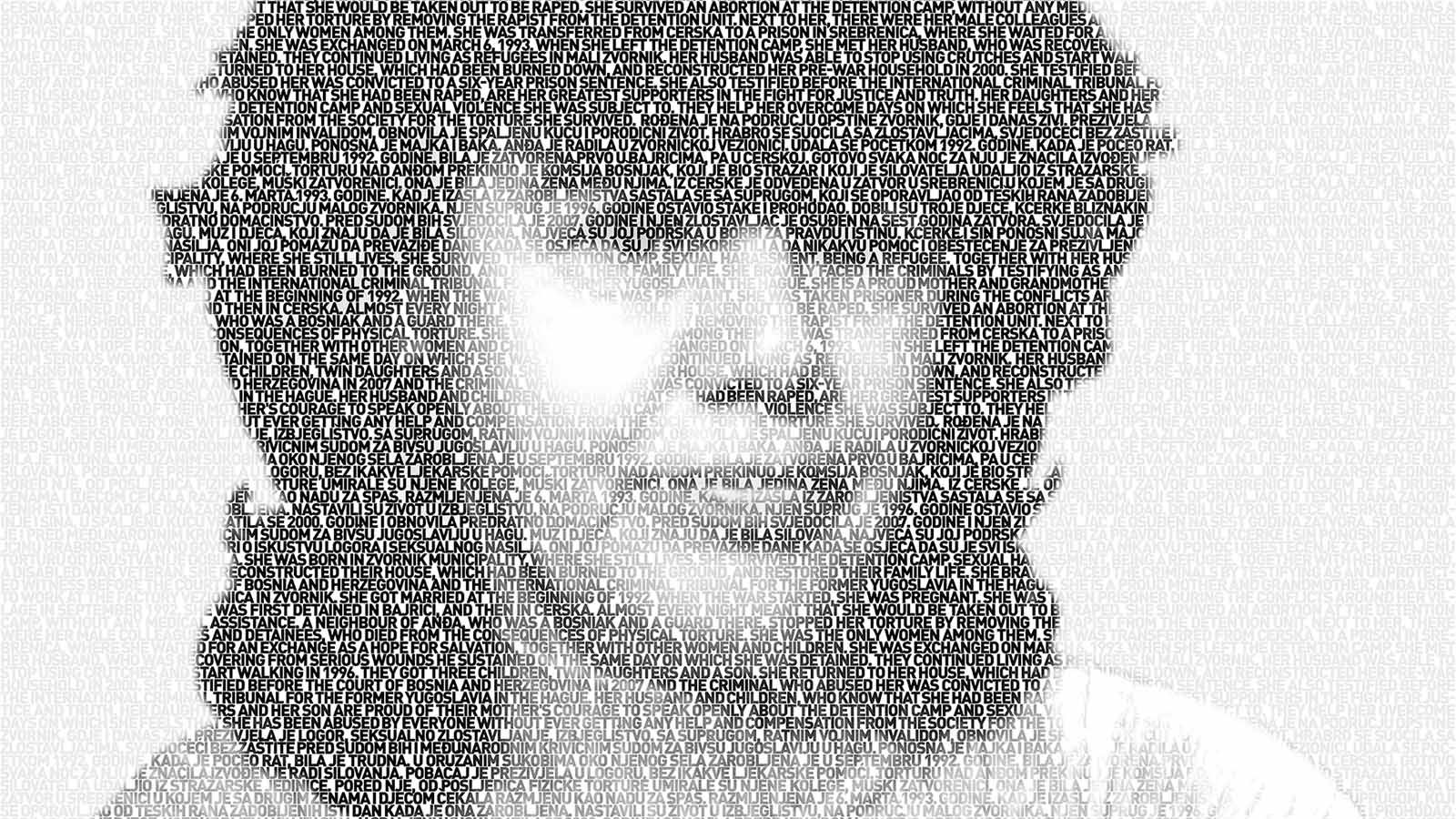 She was born in Zvornik municipality, where she still lives. She survived the detention camp,  sexual  harassment,  being  a  refugee.  Together  with  her  husband,  a  disabled  war  veteran,  she  reconstructed  their  house,  which  had  been  burned  to  the  ground,  and  restored  their  family  life.  She  bravely  faced  the  criminals  by  testifying  as  an  unprotected witness before the Court of Bosnia and Herzegovina and the International Criminal  Tribunal  for  the  former  Yugoslavia  in  The  Hague.  She  is  a  proud  mother  and  grandmother.

Anđa used to work at the factory Vezionica in Zvornik. She got married at the beginning of  1992.  When  the  war  started,  she  was  pregnant.  She  was  taken  prisoner  during  the  conflicts  around  her  village  in  September  1992.  She  was  first  detained  in  Bajrići,  and  then  in  Cerska.  Almost  every  night  meant  that  she  would  be  taken  out  to  be  raped.  She  survived  an  abortion  at  the  detention  camp,  without  any  medical  assistance.  A  neighbour  of  Anđa,  who  was  a  Bosniak  and  a  guard  there,  stopped  her  torture  by  removing the rapist from the detention unit. Next to her, there were her male colleagues and  detainees,  who  died  from  the  consequences  of  physical  torture.  She  was  the  only  woman among them. She was transferred from Cerska to a prison in Srebrenica, where she  waited  for  an  exchange  as  a  hope  for  salvation,  together  with  other  women  and  children. She was exchanged on March 6, 1993. When she left the detention camp, she met her husband, who was recovering from serious wounds he sustained on the same day on which she was detained. They continued living as refugees in Mali Zvornik. Her husband  was  able  to  stop  using  crutches  and  start  walking  in  1996.  They  got  three  children, twin daughters and a son. She returned to her house, which had been burned down, and reconstructed her pre-war household in 2000. She testified before the Court of Bosnia and Herzegovina in 2007 and the criminal who abused her was convicted to a six-year  prison  sentence.  She  also  testified  before  the  International  Criminal  Tribunal  for the former Yugoslavia in The Hague.

Her  husband  and  children,  who  know  that  she  had  been  raped,  are  her  greatest  supporters  in  the  fight  for  justice  and  truth.  Her  daughters  and  her  son  are  proud  of  their mother's courage to speak openly about the detention camp and sexual violence she was subject to. They help her overcome days on which she feels that she has been abused by everyone without ever getting any help and compensation from the society for the torture she survived.

„I would like us, those women who have had similar experiences, to meet more frequently. It gets easier when we talk to each other. Sometimes we also joke and heal each other's pain... And I would not wish anyone, not even the worst enemy, or any woman, to experience what I have experienced...”

''I have been keeping the yellowish discolored copy of the 2007 ruling, in which the Court of Bosnia and Herzegovina sentenced one of the abusers, following his guilty plea, to a six-year prison sentence. The ruling is a small symbol of justice and truth, al-though no prison sentence can compensate and heal the horrors, pain and humiliation I survived."