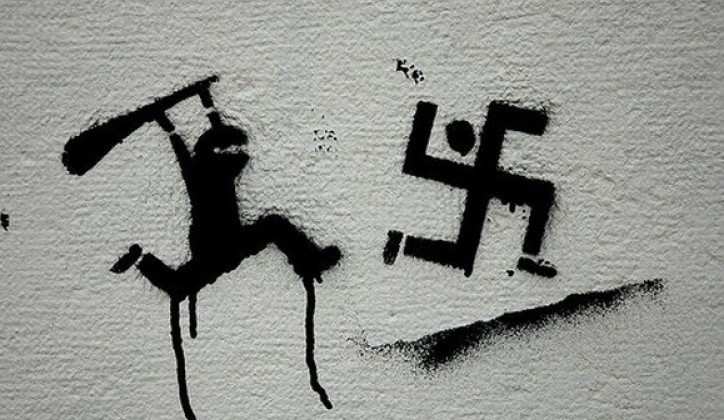 Historical revisionism on the day of victory over fascism

Every May 09, we have been celebrating the day of victory over fascism in our region for 75 years, but also throughout the world, or this is what we naively believe it to be. When democratic systems are facing a crisis, nationalism becomes extreme, and historical revisionism becomes the key tool in the hands of those who are directly or indirectly flirting with neofascism. Such an ideology is frequently jointly supported by political, church and intellectual elites, which is not only a characteristic of the former Yugoslav countries, but also something happening in many other countries in Europe and the rest of the world.

Over the past years, I have witnessed that fascism has not been eradicated. I am afraid that it just assumed a new form and is increasingly awakening. Formally, it may have been defeated, but over the past ten years, we have been witnessing the rise of the extreme right ideology in Europe. In EU Member States, there is a trend of growing movements, whose members’ attitudes towards refugees and migrants are extremely negative, so that this results in a stronger national sovereignty.

If someone had told me a year ago that a mass for ''innocent Bleiburg victims'' would be organised in Sarajevo, I would have laughed and said that it was absolutely impossible. This would not be an issue if over the past years, there had been dignified commemorations for innocent victims. However, it is a fact that these events have been celebrating the Ustasha movement for years and the persons participating in commemorations have even used the Nazi salute.

Austrian courts handed down two convictions in case of participants in the last year’s gathering, because they violated the Law on Prohibition of the Use of the Nazi Salute. It is clear that they have been manipulating the facts for years and systematically abusing victims in order to strengthen the historical revisionism that has been imposed since the beginning of 1990s both by political elites and the academia and the media that serve political propaganda purposes.

Unfortunately, we have witnessed that the mass was scheduled in the Sarajevo Cathedral on May 16. Only in Sarajevo, the armed forces of the Independent State of Croatia, a puppet state of Nazi Germany, killed around 10,000 civilians in World War II. The commemoration in Bleiburg was cancelled this year due to Covid-19 pandemic, but members of the Austrian Green Party, die Grünen, recently announced that they were working on ''also preventing the fascist gathering from taking place after the corona virus crisis''. The commemoration in Bleiburg is always organised by the Bleiburg Honour Guard, Bleiburger Ehrenzug, an association whose members have been abusing the commemoration for political propaganda and exhibition of fascist symbols for years. What is even more ironic is the fact that during the last assembly meeting of the Interreligious Council of Bosnia and Herzegovina, which was held on May 04, Cardinal Puljić has taken over the position of the chair of the Interreligious Council from Mr. Jakob Finci. On that occasion, he stated the following: ''Dialogue is the basis of our work and by respecting the diversity and looking for common values we strive at preserving our mission as moral persons and believers.'' I cannot but suspect that the contested commemoration had already been planned back then.

The mayor of Sarajevo stated that ''victims of the communist regime have the right to mark the places of suffering in a dignified manner and preserve their memory''. I wonder whether he remembers the 55 citizens of Sarajevo, who were found hanged in Marijin Dvor on that macabre March morning of 1945?

The Green Party, however, has an opposite attitude, and since they assumed responsibility as part of the new Austrian government, they are actively working on a complete ban of fascist gatherings in Bleiburg field, since, as they stress, the arguments are clear and such a gathering does not constitute a commemoration of victims of war and is not appropriate for the territory of Austria, given its history.

I wonder whether the mayor of Sarajevo is aware of the gravity and potential consequences of his statement or whether this is just one of a whole series of his gaffes? Last year, we laughed at his tragicomic statement that ''antifascism had been defeated'', however, there is nothing witty about this year’s statement, on the contrary, this rhetoric scares me.

This is also not an isolated case, as we witnessed the consequences of the Law on Rehabilitation in Serbia, glorification of criminals from World War II. At the end of last year, a promotion of a film about Draža Mihajlović, the leader of Chetniks, was organised by representatives of United Srpska Party at the theatre building in Prijedor. In Croatia, there are still serious discussions as to whether it should be allowed to use the salute ''For homeland – ready!'', although Zoran Milanović, the President of Croatia, clearly expressed his opinion several days ago by leaving a gathering in which one of the participants wore a shirt with the controversial slogan. These are only some of the numerous and increasingly frequent cases of the growing neofascistic rhetoric, the supporters of which are increasingly young persons, but also the media. In addition to all of this, public glorification of movements that caused the deaths of tens of thousands of persons is still allowed, which only additionally strengthens and supports revisionism and demonises antifascism and its values.

Unfortunately, the wave of the growing extreme right has been present in the rest of Europe and world, from Brazil and USA, all the way to Spain and Austria. A banner with the inscription ''Praise Mussolini'' was displayed last year on a square in Milan, where the bodies of the fascist dictator Benito Mussolini and his supporters were hanged after the execution. On the following day, the Deputy President of the Italian Government and Minister of Internal Affairs, Matteo Salvini, skipped the commemoration of the liberation of Italy in World War II. On the other hand, Salvini has gained the sympathies of other European right-wing leaders as a result of his anti-migrant and anti-Islamic attitudes and has the intention to establish a single largest fraction in the European Parliament together with the right-wing leaders from Germany, France and Hungary.

We have almost forgotten how attractive fascist ideas used to be for Europeans, but the growing number of extreme right-wing supporters all over Europe can remind us of this. The trust in EU institutions is dwindling and Member States primarily represent their national interests, but this is only a reflection of the state of mind of citizens, who are repressing the idea of European citizenship and supporting extreme nationalist narratives.

However, the day of victory over fascism is still celebrated throughout Europe, including also in our country. It seems as if the need for spreading antifascist idea has never been greater over the past 75 years than now. History teaches us that times of crisis as these are the most fertile period for the growth of neofascistic organisations. Democratic societies therefore may not ignore such phenomena and must react on time. Numerous young generations lack the right picture of the history of the 20th century specifically due to historical revisionism, which is present in all spheres of the society, education, politics and the media.

Is this the freedom for which such a terribly high number of innocent victims died – these shackles that Europe is forging? Or the domination of the extreme right? I obviously have a completely different notion of freedom, because I see more and more fascism and less and less freedom. It is no longer only a matter of jeopardised collective freedom, but rather of being lulled into a false impression of actually being free. Today we are celebrating values that are on the brink of extinction.

However, this is not so much of a political issue as it is an issue of the consciousness of the population, social responsibility and empathy. This is not only related to politics, these are values we are instilled at home and school, and it seems that they are missing. We are neither free nor is fascism dead. Fighting fascism never stops. Today, more than ever before, we must live antifascist values and fight for them. Freedom, solidarity, equality, peace and tolerance are universal values and they are worth fighting for, not only for ourselves, but also for those that are come after us, just as previous generations fought for us.

Youth must be able to recognise the ideology of good and evil. In order to achieve this, we need the support of the educational system and cultural institutions that are obliged to promote in their work those ideas that the contemporary and united Europe is based on – namely antifascist ideas.

Azra Berbić is a lawyer and an experienced NGO volunteer and activist at Oštra Nula and Narko Ne. As a freelance journalist she is writing for numerous media outlets. In her work and her articles she is dealing with rights of youth, women and girls, elimination of gender stereotypes and social rights, culture of remembrance and facing the past. She is also a fan of nature and scenic landscapes in Bosnia and Herzegovina and hikes in her free time.