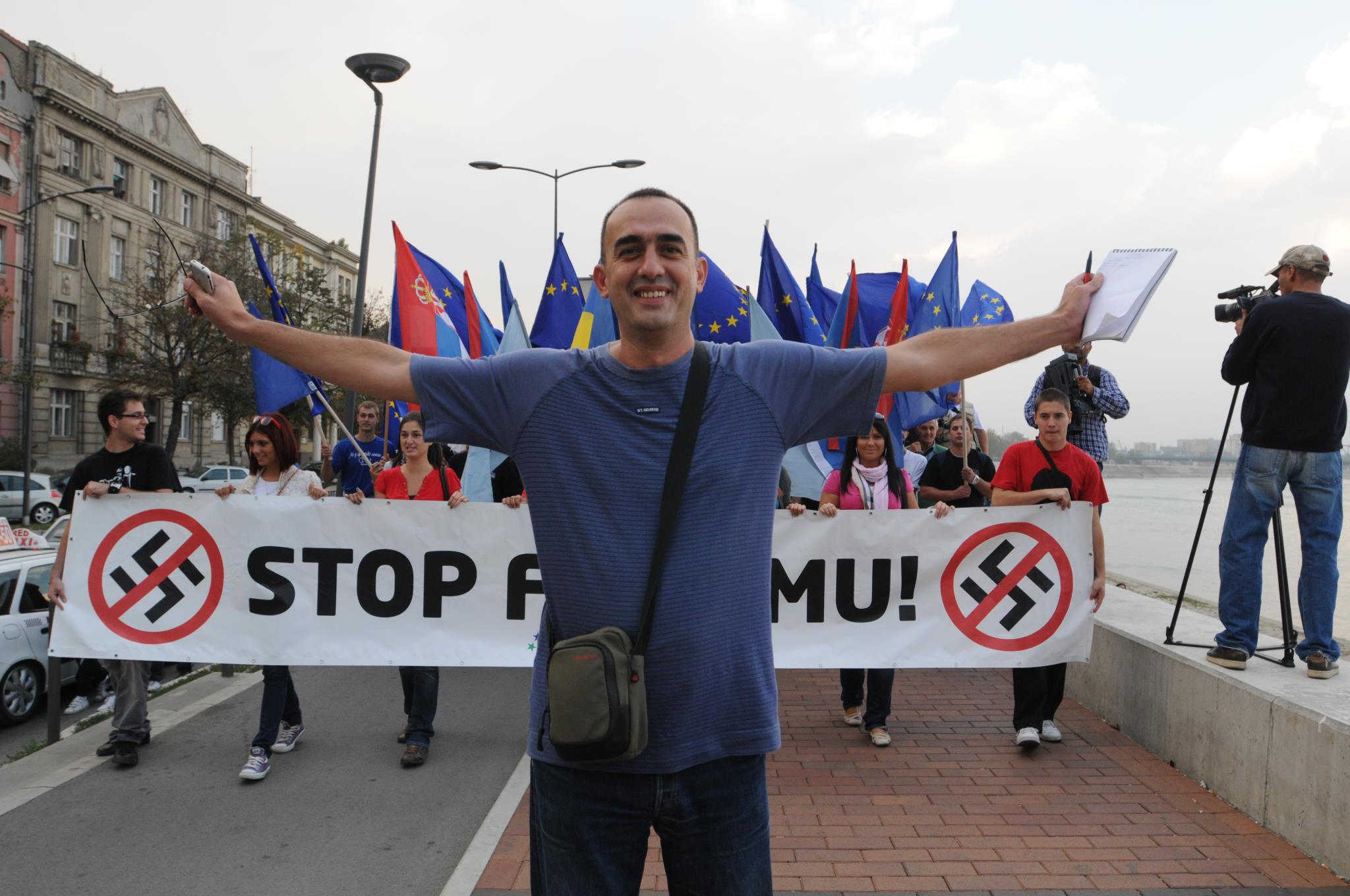 The Serbia Case: Tabloid Journalism and Dealing with the Past

Reporting on topics related to Serbia’s wartime past has decreased in Serbia in recent years, including coverage of trials for war crimes and for victims of war crimes and their families. Since the mandate of the International Criminal Tribunal for the former Yugoslavia (ICTY) has ended, and international pressure has weakened, serious issues relating to Serbia’s wartime past have been notably marginalized in the press and only, rarely, reported on by independent media outlets. On the other hand, dealing with the past has been intentionally tabloidized by some mainstream media outlets, with the aim of creating even more public confusion.

There has been no political will to open the topic of Serbia’s responsibility for war crimes committed in the former Yugoslavia, even under the former/current pro-European Serbian government led by the Democratic party. International pressure on Serbia to cooperate and support war crime prosecutions was presented as blackmail coming from the great Western powers or, even worse, as a kind of “trade”: ‘you give us criminals, we grant you (EU) funds.’ It’s simple logic that those Serbian politicians who served as accomplices and direct participants in Milosevic’s criminal endeavors, and have remained in power since, will do anything they can to not only cover up the topic of war crimes, but manipulate the public to the point of presenting executioners as victims and vice versa.

The voices of the few professional journalists who still persist in writing about “war topics” simply aren’t heard above the deafening noise of the propaganda produced by regime-aligned tabloids. Media outlets like Informer, Alo, Kurir, Srpski telegraf, and Večernje novosti, amongst others, compete in offending Croats, Bosnians, Albanians, Montenegrins and anyone else they can declare an enemy of the Serbian nation. That approach is “total propaganda”, and blatantly shameless. In a symbolic sense, such propaganda is a natural continuation of Mladić's command during the multi-year shelling of Sarajevo: “Go crazy!”

Examples of the media “go(ing) crazy” are especially prevalent when commemorating the anniversaries of major wartime events, such as “Operation Storm” in Croatia (Oluja), the onset of the NATO bombing of Serbia, or the genocide in Srebrenica. “The Ustashas celebrate the slaughter of Serbs, the EU watches and says nothing”; “The Croats don’t stand a chance”; “Serbia suffered, while Ustashas had orgies”; “NATO is murdering young girls in Serbia”; “The West is making chaos in the Balkans”; “We have to be ready for a new war”; “Bakir would kill again”; “The Hague crime: Karadzic getting a life sentence”. Writing down all of the war-mongering titles from Serbian tabloids would take far too long and fill volumes of books.

Of course, all of these titles are followed by articles completely devoid of background information or context. There are even articles written about this phenomenon of “omitted background”. What does that mean? To put it bluntly, in tabloid reporting – and, unfortunately, also in Serbia’s more ‘serious’ media outlets - the wartime narratives tend to be one-dimensional and one-sided. Take, for example, the media’s coverage of the anniversary of “Operation Storm” (Oluja), when they deliberately omitted information about what took place in Croatia from the spring of 1991 to August 1995. That kind of reporting, combined with an education system in which the wars of the 1990s are either not mentioned or are presented in a very biased way, produces new generations of Serbian citizens who are most likely convinced that Serbia, is regularly and wrongfully blamed and, is thus, the perpetual (and only) victim.

When the media mentions victims, they are only “our” victims (ethnic Serbs). The stories of and narratives surrounding these victims are manipulated; numbers are made up, events are fabricated, and history is forged. And then, after the relevant anniversary passes, even “our” victims are forgotten, left to deal with their suffering and trauma at the very fringes of society.

It’s obvious that the media’s tactic of “go(ing) crazy” and deliberately misleading and confusing Serbian citizens comes directly from the top leadership of the government. Serbia’s Ministry of Defence, with the notorious Minister Aleksander Vulin at the helm, is leading the show in this regard. This minister is in charge of permanently ruining relationships with neighboring states, addressing them with vocabulary that is irresistibly reminiscent of Miloševic’s time. Vulin is, of course, just one of the current politicians who were in power when war crimes were committed with the backing of the Serbian leadership, the “official Belgrade”. That is why it comes naturally for him to play the “scarecrow” or fear monger in the region, to publish books by convicted war criminals, to organize their book promotions, celebrate them as war heroes, and offer them the opportunity to give lectures at the Military Academy. There have been many examples of this. Veselina Šljivančanin, Vladimir Lazarević, and Nebojša Pavković – all convicted war criminals – have been decorated by Vulin’s halo of new-heroism. The minister justifies this by saying: “Serbia doesn’t need to be ashamed of those who have defended her.” Or: “The time of shame is over; this is the time of silent pride.”

This kind of rhetoric voiced by Vučić’s ventriloquist dummies, is repeated in most of the media, with no critical detachment or even basic journalistic inquiry. Who were these “heroes” defending, and why was there a “time of shame” in the first place? Such reporting in the media cannot, in any way, contribute to the formation of critical public opinion around the scope of horrors committed across the Balkans in the name of Serbian citizens. And such reporting by the media, as well as the earlier refusal of the pro-European politicians to scratch below the surface of our war past, even after 2001, when the “discovery” of mass graves in Batajnica near Belgrade, in the suburbs of a European capital, respectively led to the restoration of this kind of rhetoric. Their behavior has brought to power those who would do anything to avoid taking responsibility for planning, implementing, or abetting ethnic cleansing, genocide, mass rapes, and other mass crimes in the former Yugoslavia. All of those in power, together with war profiteers and “deep state” structures, have taken too much of a bite out of the money and privileges bought with blood to now willingly transform themselves into some kind of “peacemakers”. Which is what many had believed the “new” and “pro-Western” Aleksandar Vučić would do.

The same goes for journalism: None of Milošević’s war propagators from the media were ever held responsible for warmongering in the 1990s. An unpunished crime will always create space for new crime. Today’s tabloid warmongering is nothing more than the continuation of that from the 1990s. There is one important difference: the hatred is now home, used against its own citizens.

Dinko Gruhonjić is a docent at the Department for Media Studies at the Faculty of Philosophy, University of Novi Sad, program director of the Independent Society of Journalists of Vojvodina, a journalist and a civil activist.