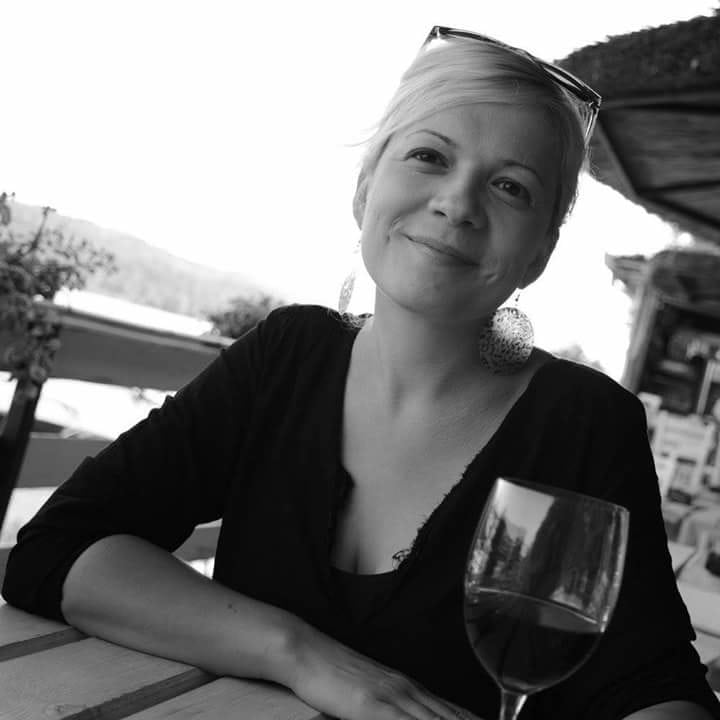 I was five years old when the war started. I do not remember the images, they are clear, but intermittent. Even today, twenty-two years after the end of the war in Bosnia and Herzegovina, I am unable to put them together in a single whole. I remember that immediately before the war I was supposed to start going to swimming classes, my mom took me to the shopping mall ‘’Sarajka’’ to buy me a swimming suit. It was the first time that I saw a multitude of x-shaped objects on the streets of Sarajevo and later I learned that those were the so-called barricades.

Many years would pass from my mom’s and my swimming suit shopping and my first swimming attempt. In peacetime, if today’s period can be called that way, I learned to swim only at the age of 27. That is the only image of the war that has not remained a fragment.

As regards all other stories and images, I decided to try putting them together over time. When I accidentally found myself in the field of activism, the first call that I applied for at my own initiative was related to peace building. For me it was important that those things that they had been supressing in me for years somehow get out. War stories no longer mattered to anyone, because what mattered was to ‘’look towards outside’’, one would be told ‘’keep quiet, we are alive, let us go forwards’’. And I somehow always believed that one’s inner self needs to recover from the shock, trauma and everything ugly that the war has sown, that it needs to come alive, because happiness is not complete due to a cramp in which the body is trapped. My first steps in peace activism started in female company. We were sitting all tense, all of us with different identities, I, Mara, Lana, Lejla, Gordana, etc. Our names determine our identities, or at least this was the case in the war, the one that I remember through the fragment of an image. We start talking, I listen and wait for my turn. I was a child, my mother was a woman in her best years who had learned everything that today is called ‘’male chores’’. Back then, there was no such thing, one would do everything if one wanted to survive. It was even important how resourceful one is, because it increased one’s chances of survival. I am following the discussion, I do not speak, my voice is crushed by a fat lump in the throat.

I am sorry that such stories are nowhere to be found, except in this round that we share with difficulties. Why can’t they be found in books, brochures, on memorials, slabs, bridges? Does nobody, except for ourselves, care to know what fantastic fighters and heroes all these women, who survived the war, were? I would like to hug them all, myself included, because of the childhood that was deprived of a whole irreversible era. I would like to scream, I would scream all these told stories loudly, so loudly that they would never disappear…

Here, in this circle, it becomes important for us and we decide to preserve the women’s peace history and female war experience and the immeasurable contribution of women to peace building. In 2013, we established the initiative ''Mir s ženskim licem'' that gathers representatives of women’s organisations from twelve cities in Bosnia and Herzegovina. This is how our fight starts, a story that I am trying to tell here. We started with an idea of immense importance.

In 2013, we submitted the initiative for marking December 8 as the ''Remembrance Day for Women that Died in the War'', which should be included in the official calendar of public holidays. We selected a neutral date that does not ''take sides'', we dedicated it to all women, because each and every of them matters, the story of each and every of them matters. One cannot weigh that and should not do it! Due to this general ''bundle'' enclosing the initiative, we deeply believe that it will be accepted and that it will be included in the official calendar as an important date worth remembering.

Of course, the first application, the first refusal without an explanation, as a fast cut that is generally less painful. It did hurt us, because they made us invisible for the nth time. Government institutions do not believe that women should be remembered or that they are worth of preserving history. In case of all books that we are making, we weigh every word, we imprint it in all pages, all these words are broken pieces that key decision makers are unable to understand. We write again, we send books that the initiative ''Mir s ženskim licem'' made about women and girls that were killed in the war, entitled ''Rat nije jednorodan''[1], including also a book about us, female activists and peace activists entitled ''Mir s ženskim licem''[2]. We do not give up, because we may not! I would like also to throw all texts I wrote into their face, but I am afraid that they would not understand, they would not understand anything…

And while we are waiting for them to understand, still believing in female power, contributions that women make on a daily basis, we will again go on the streets of cities in Bosnia and Herzegovina on December 8 to mark the ''Remembrance Day for Women that Died in the War''. That is our day, established, marked, we do not allow it to be forgotten. We are tearing down institutional ''barricades'' and appreciate our friends, peace activists, activists, women… We celebrate their work, we celebrate the history they made and remembrance of those that had an immense power.

As long as we are there to mark, remember, write, scream, demand and protest with our bodies, as long as we do not let the system suffocate us, we are working on the creation of women’s history and exchange of women’s peace experience. I do believe that all girls of this world have the possibility to preserve whole pictures and freedom and live their childhood without fear. Finally, small steps make everything that women fear in the reality of Bosnia and Herzegovina visible and recognisable, and every one of us can give his/her contribution to it and I chose to believe that this text is a small part of it.

Vildana Džekman, a peace activist, activist, feminist with a wide spectre of identities that she considers her personal wealth. Since 2013, she has been working at the Foundation CURE, and she participated in her first activism and peace activism tasks as a volunteer of the Foundation CURE in 2012. She focuses on peace building issues from a female perspective. She conducted research and she is the author of the work ''Ratni zločini nad štićenicima/ama Vukovarske bolnice'', which has never been published due to account of the situation which is not socially accepted. She participated in the writing of a book about peace activists ''HIStory is not HERstory'' and she also contributed to the book ''Rat nije jednorodan'' and ''Mir sa ženskim licem'' by actively participating in the initiative ''Mir s ženskim licem''. She researched the female perspective of peace building through an analysis entitled ''Žene, Aktivistkinje, Mir – Nisam publika onima koji narušavaju Mir''. She is the winner of a peace prize for the text ''Kad razmišljaš o identitetima a pišeš o mirovnom aktivizmu''. She likes long walks, swimming, the sea, hiking and happy people. E-mail: vildana.dzekman@gmail.com