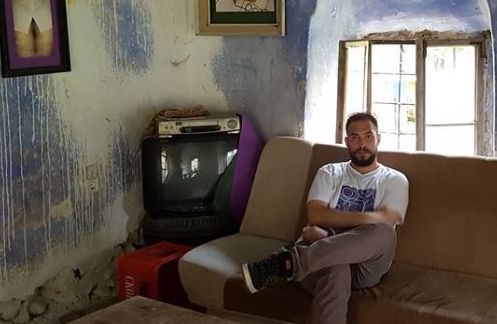 One day, the call to prayer from the younger Arnaudija and the older Ferhadija mosque will meet in front of the grammar school in Banja Luka. A teacher of fine arts will speak louder about the presentation of God in order for students to better understand the task they are given. In the classroom opposite to it, their peers will discuss the symbols of power in the Middle Ages and (post)modernism after only forty-five minutes of advanced search. When the calls to prayer start for the second time in the same shift, both classes will have already successfully completed their tasks and go home. Their homework will be to think and explain what has led to the fact that in a European country the image of God is presented openly while calls to prayer from mosques are louder than the teachers. Some of these works will be translated into English, German, French, Russian, Japanese, Arabic, Chinese, probably also into Albanian, Rumanian, Hungarian and Polish by their colleagues. They will then have a break. Someone will bring a green bill they found among their old things, a one KM bill, which is no longer used, and by the end of the break, they will already find all data about the life and work of Ivan Frano Jukić, their famous fellow citizen, friar and the man who is considered the first Bosnian and Herzegovinian journalist. They will go back to math and physics classes, after which they will hurry to get to their regular weekly evening concert of the school orchestra in the main city square. While they are waiting for the beginning of the concert, they will look up to the sky and see a minaret on the roof of a well-known hotel in Banja Luka. By the morning, they will already connect the significant and the signified of the invisible sign of development, life and culture of their city. They will then go to the swimming pool by bicycles they received from the school. They will spend the rest of the day doing practical training, a paid training that will enable them to spend their summer holidays traveling in Eurasia, Africa, Australia or America. In the evening, they will take a walk to Šehitluk, climb up to the Memorial of Fallen Krajina People, admire the famous work of Antun Agustinčić. While they look at Banja Luka from its partisan vantage point, they will mention the heritage of the national liberation fight, without which the memorial would not be there, and no city beneath it. One student will explain to her friend who were Rada Vranješević and Vahida Maglajlić, refer to the fight that the daughter of an Orthodox priest and a Muslim judge chose.

That period will seem much nearer to them than it is to us today, because on that day there will be no fear of otherness and diversity. Only things they can hear and learn from one another will matter. On the walls of the night club they will design themselves and in which they will independently decide on the content of night merriment, there will be paintings, photos, posters and comics they will discuss and that will bring them closer. In that club, there will be no tables or status symbols on them. They will not overcome artefacts of class inequality that they clothed their bodies with by moving their bodies, because there will be none. They will dance freely, openly and passionately. Schools, streets, squares and parks will be safe, because students will feel freedom in public spaces that they do not have in social media. Until the whole city eventually becomes a big social medium.

The fact that Arnaudija mosque has not been rebuilt is not the only reason why that day might not dawn specifically tomorrow. The reason is the politics due to which Arnaudija mosque needs to be rebuilt, or more precisely, the politics due to which Arnaudija was destroyed, the politics that today permeates textbooks, schools, streets, squares, parks, memorials, the public space, social media, and lives of all those that strive for power in order to determine who, when, how and how will be able to express themselves, gather, think and act freely. Because of politics and its torch-bearers, they are today unable to establish cooperatives or do honest work to earn money for travel, exploration, having fun and education. Because of politics and its torch-bearers, their parents are forced into poverty, while their exploiters are getting extremely rich. Because of politics and its torch-bearers, they are today forced to overcome obstacles limiting mobility, freedom of movement, getting to know otherness and diversity, getting educated abroad, under conditions that are more difficult than those when there were reasons for calls to prayer from Arnaudija and Ferhadija mosques.

In brief, that very same politics is the answer to the question why they ask their parents for money to be able to live, and at the same time, it is the reason why their parents are unable to ensure that money for them, because that politics is the one and only culprit for everything they are not today and what they will not be. If for no other reason, then because of the fact that torch-bearers and propagandists of such politics, which takes place in a fake, shiny and glossy past, offer myths as final answers to the question why their future is destined to doom and failure.

On that day, maybe in the near future, when Arnaudija mosque is rebuilt, their curricula, textbooks, the appearance and names of public and green areas will be completely changed. The benches on which they got their first kiss will not be destroyed in order to put up city benches for first kisses in a different location and they will not be able to hear, at the price of one convertible mark, the sound of the cannon that cuts Safikada and her love, killing her and punishing her again for the love that was not her destiny. And nobody will remain indifferent to the fact that the students of the grammar school from Banja Luka go to Prijedor to commemorate the killed children, while students of the grammar school from Sarajevo go to Kazani for the same purpose.

Nobody will be amazed at history professors and teachers who are taking children from Krajina, Posavina, Semberija, Podrinje, Romanija and Herzegovina to Bihać, Livno, Široki Brijeg, Mostar, Konjic, Sarajevo, Zenica, Tuzla or Jajce. Nobody will see this as bringing together „opposites“, because there will be no shackles of opposites and no mediated and non-autonomous „I“. Only jointly will it become possible to determine the basis of the construction of opposites and its shackles. Nobody will then frown upon hundreds of busses headed to Jajce, where all students from secondary schools will gather and breathe life into a city, which has a waterfall in its centre. Instead of Chetniks and Ustashas, youth will march through Višegrad and Široki Brijeg, singing and dancing. All of them will celebrate love and friendship, paying for costs from their pockets, but will still have enough for all novels, comics and albums they will exchange during school games. That day, no student or professor will protest because of the fact that July 11 is a day of mourning and no parent will prohibit their child to go to Potočari by organised school transport to pay tribute to the people killed by politics in just a few day, politics that some people, convicted to a 700-year prison sentence, conducted in their name. Politics that has been burying living people and numbing them for decades, them and all those that are considered different due to their name, race, religion, nation and sexual orientation. Only then, and in no other case, will Bosnia and Herzegovina be their home, instead of their camp.

P.S. Travnik is only the beginning!

Ljupko Mišeljić (1996) is a freelance journalist. He has been reporting on culture, politics, transitional justice and human rights since 2012.