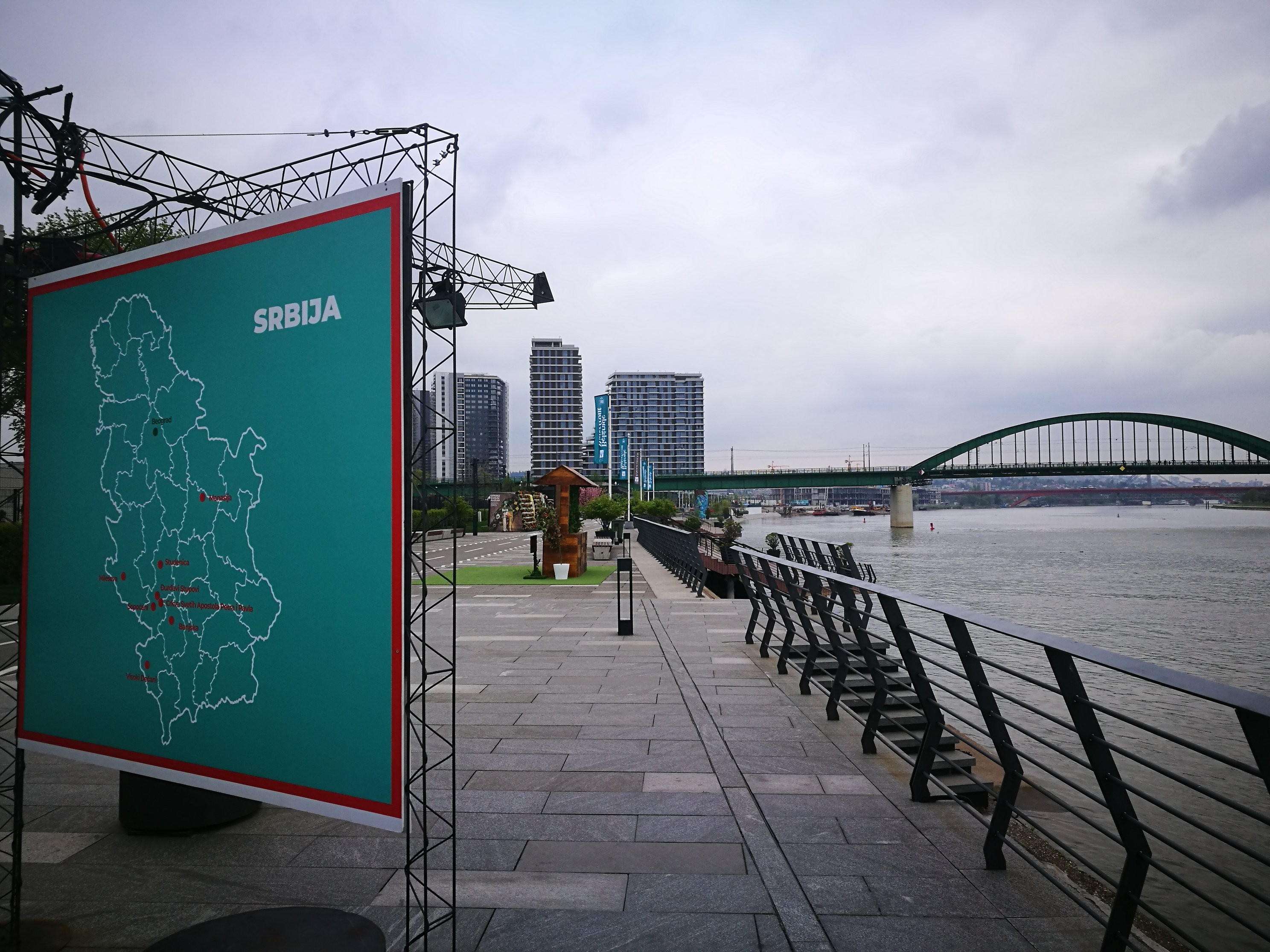 Urbanization of the past and wars of the 1990s

In Serbia today, the history of the wars of the 1990s is bureaucratized, privatized and urbanized as a politically and economically instrumentalized past which is produced so that a new globalized history of capitalism can exist unhindered in its identity crisis phase. It is a history based on privatization, de-industrialization, the emergence of new elites which became rich during the war and transition, financialization, exploitation, a huge and growing poverty, destruction of public health and social protection institutions, but also the concealment of genocide, mass graves, punishing a ‘nation’ through rape and PTSD. New mega projects, building new residential areas and memorials, as well as the restoration of bombed buildings, introduce urban spaces in new historical flows.

The regeneration of the Sava riverbanks in Belgrade was preceded by an erection of monuments to an ideological and political confusion, which has been established as the dominant culture of memory in Serbia in regard to the wars of the 1990s. After several dismissed contests, the Monument to the Victims of War and Defenders of the Homeland from 1990 to 1999 was erected at the Sava Square, at the initiative of the association of veterans. This compromise intervention into the city space honors at the same time the victims and the butchers of the wars which were largely led outside of Serbian territory. By consistently persisting on promoting politics of confusion regarding the wars, Serbia has made all those commemorated by this monument into victims for which apparently nobody is to blame. During an attempt to officially unveil the monument, Dragan Đilas, who was mayor at the time, was attacked by war veterans, preventing the official unveiling. Never officially unveiled, this monument is still rarely used for state or private commemorative rituals. When the Serbian Progressive Party came into power, the construction of the mega project Belgrade Waterfront began right on top of this shady terrain, in a private-public partnership with an investor from UAE, building a new image of a European Serbia. Apart from the primary goal which is the construction of housing for the rich, and the largest shopping center in the Balkans, further strengthening of the mythologized Serbian identity is also taking place on this patch of profitable land. In the old railway station, now void of its previous function, a Museum of Serbian Middle Ages is being planned, and on the central square, only a few meters away from the Monument to the Victims of War and the Defenders of the Homeland, the erection of a gigantic statue to one of the rulers significant for the production of the Serbian national identity – Stefan Nemanja.

Located not far from there, further up Nemanjina Street, is the Serbian General Staff building which was bombed in 1999. The facade of the B Wing of this building is now covered by a jumbo billboard, showing a saluting female soldier along with a quote from duke Živojin Mišić, a Serbian military commander from the 19th and early 20th century, calling all Serbs to be fearless. The General Staff building is the work of the Yugoslav architect Nikola Dobrović, built in the 1950s and 1960s for the Ministry of Defense. The building is a testimony to the attempt at deliberating on the history of the anti-fascist fight of the Yugoslav people, on the foundation of which Yugoslavia was built. Dobrović developed a theory of space in motion which gives an invitation to intellectual and complex dealing with the past, as opposed to mechanical memory. He was against an empty ritualization of memory, and he tried to apply his theory in his work on the buildings which he projected as a state architect. The building of the General Staff was designed to resemble the canyon of the Sutjeska river, where one of the most crucial battles took place during WWII. After the bombing, the General Staff building became an unofficial monument of the NATO intervention and the dealing of justice by way of bombs of the NATO member-states, without any mention of what triggered the intervention in the first place – the crimes of the Serbian army in Kosovo. As such, this building had to suffer certain modifications of its own history. In discussions and public narratives, an emphasis is placed on its modernist architectural elements, while references to its anti-fascist history are hidden and denied along with any possible mention of emancipatory aspects of Yugoslavia. Today, the ruins of the General Staff building have been partially cleared up, and the building is waiting for its new future. Ideas for repurposing the building included the already mentioned Museum of Serbian Middle Ages, as well as a potential sale to investors with the aim of opening a luxurious hotel, mentioning the names of people such as the current owner of the Eagle Hills company already profiting from the Belgrade Waterfront, and Donald Trump the current president of USA.

The past in Serbia is urbanized by re-writing, interpreting, editing and organizing history, the past and the memory in cities, towns and villages. The politics of all ruling options in Serbia after the 2000s was directed at achieving EU membership, which is presented as the only way toward the liberation from the burden of the past, nationalism and the heritage of the 1990s, and on the other hand the creation of a national cohesion by igniting national and patriotic sentiments when they are called for. The mentioned projects, monuments and buildings are only some of the examples of urbanization of the past in Belgrade in the mentioned tone. On the one hand, the mythologized national past is being emphasized, by erecting monuments and establishing new non-critical institutions of culture, while on the other the history of the wars of the 1990s is being blurred, and the socialist history hidden and distorted. New urbanization which follows this kind of politics is led by a desire to turn Belgrade into a new European capitol, which will attract foreign investments. Foreign investments are presented as a way towards a new “golden age”, while at the same time laws are being broken for the benefit of making deals with investors, huge amounts of public funds are being invested irreversibly and land is given for free. Due to a breach in safety regulations, there is a growing number of work-related injuries resulting in death at these construction sites. These situations are covered up in a collective effort by the state and investors, with patriotic narratives of progress, and human lives are being rendered worthless once again.

History is one of the main obstacles for establishing new neoliberal narratives and new spatial constellations in the countries of the former Eastern Bloc. In the process of establishing and urbanizing neoliberalism, historical narratives were manipulated, they were distorted, introduces, removed and emptied of their political and ethic context. In this way, a new past was projected into spaces, with the aim of an apparently inevitable future. Historical amnesia and historical revisionism have been introduced in order to hide the true effects of the announced future: unemployment, poverty, exploitation, debt bondage and homelessness.

Ana Vilenica is an independent researcher and activist. She completed her PhD studies at the University of Art in Belgrade, in the class of Art and Media Theory. She has edited three books Becoming a Mother in Neoliberal Capitalism, On the Ruins of a Creative City and Art and Housing Battles. She is a part of the collective action A Roof Over our Heads, and the Radical Housing Journal collective.