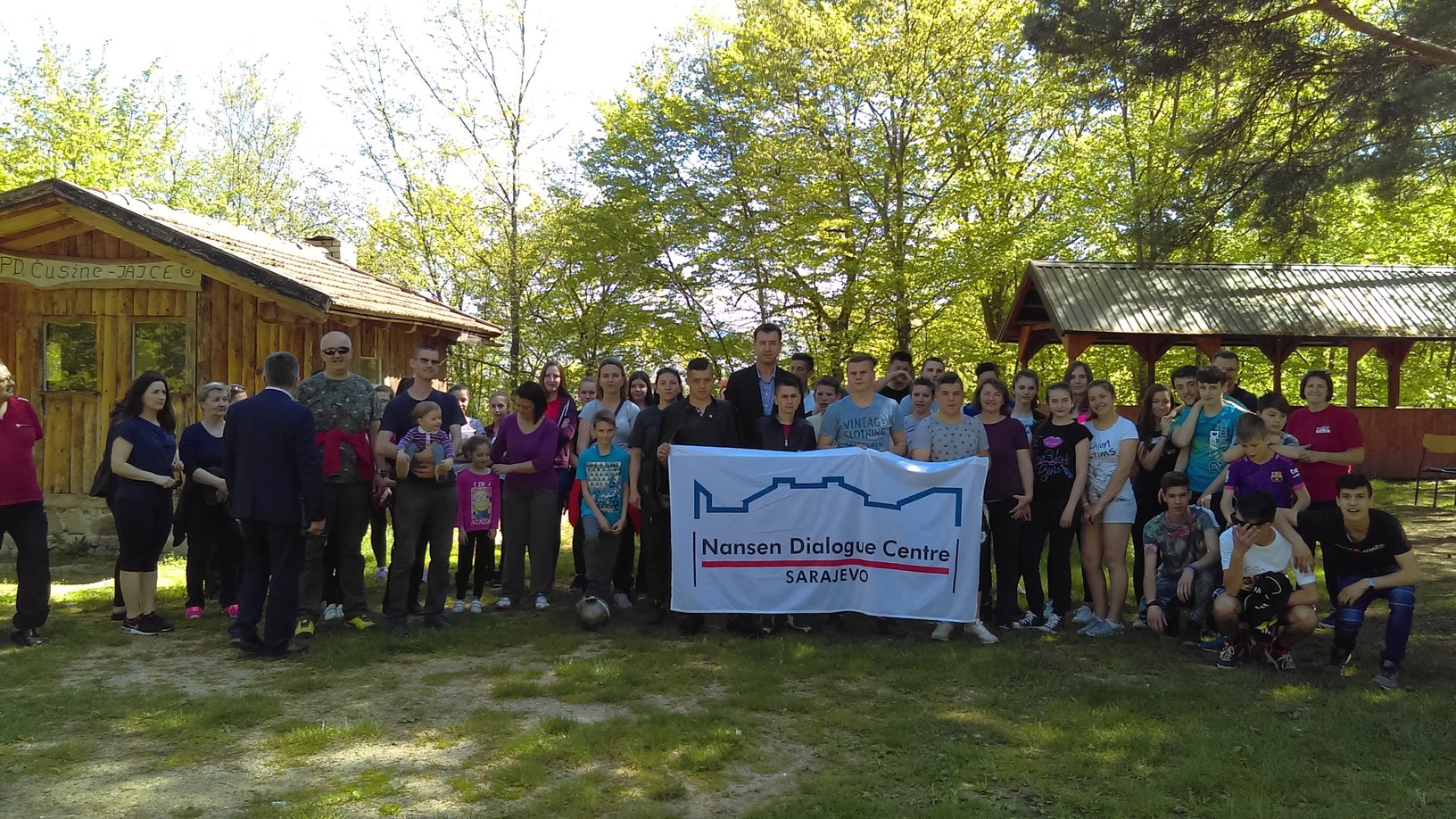 In May 2016, the media throughout Bosnia and Herzegovina published an ''unbelievable'' piece of news: a group of students of the Secondary Vocational School ''Jajce'' went out into the streets of the small Central Bosnia town, which has an almost identical proportion of Bosniaks and Croats, with very few persons defining themselves as belonging to other categories, connected the flags of Bosnia and Herzegovina, Croatia and Serbia and organised peaceful street protests against the decision of the Ministry of Education of Central Bosnia Canton regarding the opening of new schools in Jajce. New schools are supposed to operate exclusively based on the curriculum in Bosnian language. This would practically mean an ethnic division of the three existing multi-ethnic schools into six mono-ethnic schools with their own administration and teaching staff. Three schools would therefore operate based on a curriculum in Bosnian, and three schools would operate based on a curriculum in Croatian. That is an already well-known phenomenon from Bosnia and Herzegovina called ''two schools under one roof'', which is the most blatant example of ethnic segregation in local communities of Bosnia and Herzegovina.

Paradoxically, education in Bosnia and Herzegovina is considered one of the key contested issues, but at the same time, it constitutes an area of pragmatic cooperation between the governing ethnopolitical elites, which, given the fact that they prefer ethnic affiliation-based curricula and segregation of students, are maintaining a state of divided society and profit from it both in political and economic terms. In the context of such ''cooperation'', the Ministry adopted a decision on establishing three such new schools in Jajce, justifying this with the need to eliminate discrimination against Bosniak students, who had been attending lessons based on the Croatian language curriculum, which predominantly contains contents related to the Croatian cultural context. After having realised that the establishment of three new schools would mean that they would be segregated based on their ethnicity, which would jeopardise their inter-ethnic, friendly, interest and social connections, the students organised protests.

Under the pressure of the media and public-at-large that supported the students, the Ministry suspended the decision for an unknown period of time. However, since the students were convinced that the decision would come back into force very soon, the students of the Secondary Vocational School ''Jajce'' organised a whole series of activities, round table discussions, public lectures and actions together with their teachers, which strengthened their position in the public and even ensured them the support of religious communities and the international community in Bosnia and Herzegovina. By applying a multi-lateral approach and acting in synergy with other actors, the students won, and the Ministry finally gave up on its decision to divide the schools, which was presented as a solution for the discrimination against Bosniak students, and introduced the remaining two subjects from the ''national group of subjects'' in the regular school curriculum.

As regards the importance of their fight for their own community, but also for Bosnia and Herzegovina in general, the students say the following: ''The purpose of protests was to prevent divisions. To put pressure on the Ministry. We expressed our will in order to ensure useful change. We want the curriculum to be amended, so that everyone to have the same rights and high-quality education. It is important that we speak up and that our voice be heard in order to stop segregation. We have the support of all secondary school students. It is important that the Government becomes aware of the fact that we, students from Jajce, are not alone, that we are speaking up against segregation, but that we are supported in this by our peers from the whole Bosnia and Herzegovina.

The importance of protests for Jajce lies in the fact that we are taking a small step against segregation. Their importance for Bosnia and Herzegovina is that other secondary school students from the whole Bosnia and Herzegovina, who lack the courage to speak up, are encouraged to do so [nevertheless]. The aim is to resolve the national issue, to overcome divisions and finally improve the quality of education. We would like politicians throughout Bosnia and Herzegovina to understand that we have a clear view on this.''[1]

Although the students have won, as they themselves say, that is ''a small step against segregation''. They are aware that the unforeseeable higher-level politics can always turn things around. In this respect, they continued cooperating with their teachers, in part also with their parents, in order to solidify their own position and role in the community through a series of multi-ethnic activities that contribute to the improvement of multi-ethnic relations in Jajce. At the same time, they also initiated activities in order to empower students from ethnically segregated primary schools by working on eliminating stereotypes and prejudices about other ethnic groups and building friendships across ethnic lines. That will prepare them for a multi-ethnic environment at multi-ethnic secondary schools, where they will continue their education. The fact that as of next year, students from a grammar school from Mrkonjić Grad, a neighbouring town in Republika Srpska, will participate in joint activities, indicates that the story is acquiring a wider dimension.

Based on the belief that sustainable social change comes through a bottom-up approach, that it stems from the daily life of the local community and involves a long-term, locally planned and lead process, which includes all important actors from the community, the Nansen Dialogue Centre Sarajevo (NDC) has been actively involved in Jajce as a catalyst of such processes since 2009. A strong bridging social capital[2] was created in this segregated community in cooperation with the local government, school and some NGOs, which, according to respondents[3] has also largely contributed to the protests. By building on the existing successful cooperation and the same principles, the students and their teachers continued their activities with the assistance of Nansen Dialogue Centre (NDC) and its partners, the Mountaineering Club Ćusine, SHL Foundation and ZFD Forum. In addition to the immediate assistance in the implementation of local activities, the engagement of a larger number of organisations will make it possible to disseminate the positive story about students from Jajce and help youth throughout Bosnia and Herzegovina to fight existing or new forms of ethnic segregation in a similar manner.

[1] A compilation of views expressed by students of the Secondary Vocational School ''Jajce'' during their work in the focus group for the purposes of the study case Jajce – Machine for Production of History, Students Protests against Ethnic Divisions, implemented by NDC Sarajevo in the period July – August 2017. The English draft report is available upon request.

[3] From the mentioned study.