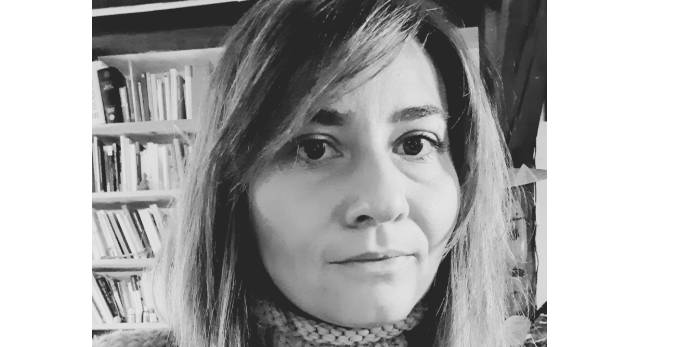 Memorialization of the Present

The description of fascism by Benedetto Croce as a “contemporary moral illness” can serve as a starting point for reflecting on the phenomenon of the mass erection of revisionist, negationist, and clerical-fascist monuments all over Bosnia and Herzegovina. These monuments seem to memorialize the present rather than the past. Their intention is to impress or intimidate visitors. In educational-patriarchal terms, their point is to serve as a warning to control and prevent the creation of new progressive narratives. Thus, they “turn” people and the new generations away from the road towards reconciliation, admission of guilt, impartial and scientific establishment of facts, and of an accurate war history, which as such can be only one - inclusive history.

Therefore, revisionists and negationists stand by the traditional method of memorialization. They prefer to build monuments out of enduring, rigid materials, such as concrete, marble, steel and bronze. Such monuments support the militaristic idea of territorial occupation and division. On the other hand, the new global trends of memorialization lean towards conceptual solutions and ecologically conscious and sustainable approaches. The goal of the latter is to create a dynamic space that encourages inclusiveness and interaction and seeks to respond to the ever-changing needs of the society.

Unfortunately, an inglorious example of chauvinist memorialization appeared recently in the place called Stari Brod, about fifteen kilometres down the Drina Canyon near Višegrad. Amidst the beautiful, pristine nature, architect Novica Motika designed, and sculptor Bojan Mikulić created a masterpiece of literalistic kitsch, placing 27 bronze statues into the Drina. This creation draws on the power of fear. It acts as a most efficient stimulator of fearsome visions about an uncertain future for a subdued people (in this case Serbian) if they become seduced by the charms of the multi-ethnic life. An Orthodox Christian chapel, and a concrete memorial centre bearing the names of 6,000 victims of “ustaša, Muslim, and partisan” crimes engraved across the entire wall were built next to the sculptures.

Motika and Novaković were particularly inspired by an alleged event in 1942. It is the unrecorded suicide of 320 virgins - women with no protection by men, who decided to collectively jump into the Drina to “save their honour” which would be lost if raped by soldiers of a different ethnicity, nationality, or religion. For this work, Motika received the Medal of Merit for the People from the President of the Republika Srpska, Zeljka Cvijanović[1] as a sign of gratitude for the truly creative and suitable design. 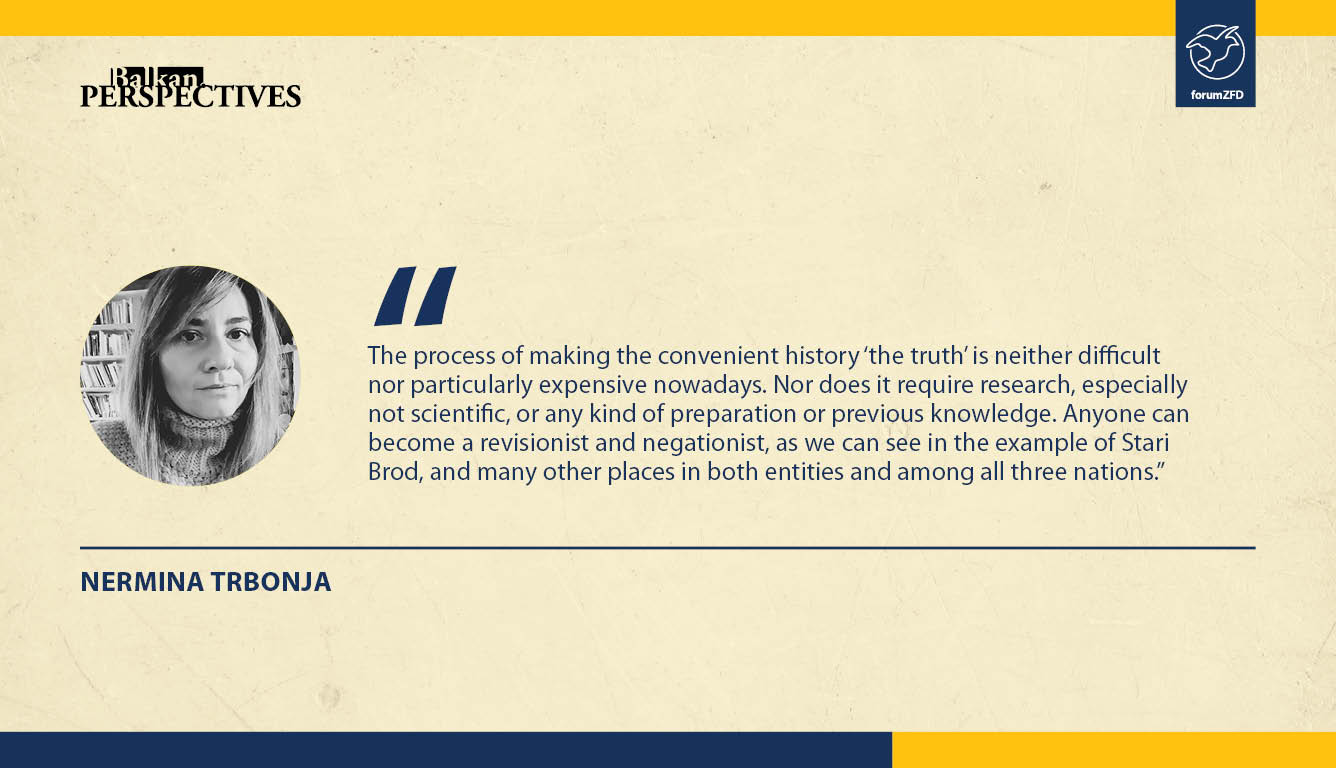 As this ‘genocide’ in Stari Brod has never been recorded in any of the numerous historical papers corroborated by evidence in the former Yugoslav territory and beyond, nor has there ever been a serious investigation into its veracity, three key questions arise:

Who benefits today from this monument in Stari Brod?

The plot. Since 2008, several powerful people (scientists, priests, politicians, and artists) have claimed that through the revision of history, and without any supporting historical publications to date, they have discovered that in spring of 1942, over 6,000 civilians of the Sarajevo-Romanija and Podrinje region were chased down to the Stari Brod and Milošević region and then killed by the Black Legions of the Independent State of Croatia (NDH), Muslims, and partisans. They also claim that this crime was been recorded and that the ‘memorial museum’ is a response to the silence that followed such described genocide. History is well aware that the leadership of NDH had a very radical approach towards the non-Croatian population. According to the official data, there were 5 military forces operational in Eastern Bosnia in spring 1942: NDH, Germany, Italy, Nedić’s Serbia, and the partisans. At that time, četnik military units signed a series of agreements with NDH, the Italians, and the Germans[2], which would not have been possible had such a genocide been committed. While the authors of the monument claim that the Italian units did not allow Serbs to enter Serbia, the alliance between the Italian crew in Višegrad with local Serbian četnik units has been covered in particular in historical documents. History is also familiar with the crimes committed in Eastern Bosnia. For example, the book Eastern Bosnia in the People’s Liberation War (page 6, 1971) claims: “It seemed that the četniks and ustašas were competing who would commit the most crimes – it is hard to describe, the people were helpless and the partisan forces too scarce to help everyone.”

However, what history does not know is this scenography of the genocide against 6,000 Serbian civilians in Stari Brod in spring 1942 that the monument refers to. It is difficult to ignore that such a scenography carries elements of an extremely morbid plagiarism of the Srebrenica genocide committed in 1995, reanimating the theory by which denial and excuses are two sides of the same coin.

Who benefits today from the scenography of a collective suicide of 320 virgins?

The plot. 320 virgins jumped into the overflowing Drina in spring 1942, to avoid rape by non-Serbian soldiers and ‘save their honour’, or perhaps, the honour of their men. If today’s leadership cared so much about the position of women in society, they would probably do something about the frequent femicide, violence, sexual harassment, and rape occurring nowadays. Perhaps they would solve the status of the survivors of sexual violence in the last war and provide for them a dignified life, or at least, easy access to healthcare. By doing so, they would begin to solve the escalating problem of women’s oppression in Republika Srpska and Bosnia and Herzegovina. Instead, they decided to ‘solve’ these issues in a different way. Once the screaming statues were firmly embedded in the river, the local pagan ritual ‘swimming for the holy cross during Epiphany’ was moved the following year[3] to the exact spot where the virgins committed the collective suicide. Let us imagine a scene of muscular young men, with their heads shaved, diving for the holy cross in the middle of winter, fantasizing about the bodies of honourable virgins taken by the river, while hoping for a blessing, and especially for the resurrection of women sanctified by both patriarchy and chauvinism.

Who benefits today from the construction of the ‘warning’ complex lost in glorious nature?

The plot. The construction of the memorial complex was financed by local and neighbouring[4] grey eminences, amnestied tycoons, leaders of radical right-wing movements, who enforced Karadžić's policy in the last war and participated in the creation of para-structural authorities, such as the Serbian Autonomous Region (SAO) of Herzegovina. Of course, they never bothered to study the history of WWII, but instead they actively participated in the architecture of the dark side of the recent history.[5]

From the town of Borika near Rogatica, all the way to the 'warning monument', a macadam road was recently built. The tourism agencies of Višegrad offer a visit by speedboat to the complex. Perhaps in the near future we will witness the construction of accompanying private tourist complexes or similar money laundering machines, to the detriment of significant natural resources and on the backs of underpaid Serbian workers, or rather the same young men who strengthen their faith by diving into icy waters for the holy cross, who have jobs lined up as guards and doormen for the well-established crew of private security agencies.

The process of making the convenient history ‘the truth’ is neither difficult nor particularly expensive nowadays. Nor does it require research, especially not scientific, or any kind of preparation or previous knowledge. Anyone can become a revisionist and negationist, as we can see in the example of Stari Brod, and many other places in both entities and among all three nations. That is the shortcut to reaching the road where militarized masculinities confront each other, enemies are invented even where there are none, and fierce battles are fought from the comfort of armchairs by powerful men against ‘evil’ and ‘interplanetary’ conspiracies.

Nermina Trbonja is a sociologist attached as a doctoral student to ISP, University Paris Nanterre and as a researcher to NYU Abu Dhabi. She belongs to the wave of young thinkers interested in critical military and security sociology. Her research focuses on different aspects of the gendered culture of the military and paramilitary structures. She is part of KUMA international and WARM Foundation team. She led the research unit of OTI on far-right movements in BiH and for over 10 years was part of the UN family.

As an antimilitarist activist, she is involved in many local, regional, and global initiatives dealing with issues related to gender, war, and the aftermath of war.

[2] Stepančić, Miroslav, The Third Enemy Offensive in Eastern Bosnia, Montenegro and Herzegovina Seen through Enemy Documents, Vojnoistorijski glasnik, iss. 3., Belgrade (1951); Leković, Mišo, Agreement between the occupiers and quislings on joint operations against the NOVJ in the spring of 1942 (TRIO - Third Enemy Offensive), Vojnoistorijski glasnik 1, Belgrade, (1988); Dr. Rasim Hurem: The Crisis of the National Liberation Movement in Bosnia and Herzegovina at the End of 1941 and the Beginning of 1942. Sarajevo 1972. p.211; Hoare, Marko Attila, Genocide and Resistance in Hitler's Bosnia, The Partisans and the Chetniks 1941-1943, Oxford University Press, Oxford, 2006; Antonić, Zdravko, Uprising in Eastern and Central Bosnia in 1941, Vojnoizdavački zavod, Belgrade, (1973); Hurem, Rasim, Agreements on cooperation between the state bodies of the Independent State of Croatia and some Chetnik detachments in eastern Bosnia in 1942. Contributions: Institute for the History of the Workers' Movement Sarajevo 2, no. 2 (1966): p. 285-325; Collection of documents and data on the national liberation war of the Yugoslav peoples, volume XIV, book 1, document no. 65, p. 175; Shumanovic, Vladimir. Key military-political events in Eastern Bosnia in 1942, doctoral dissertation defended in 2019. Available at: