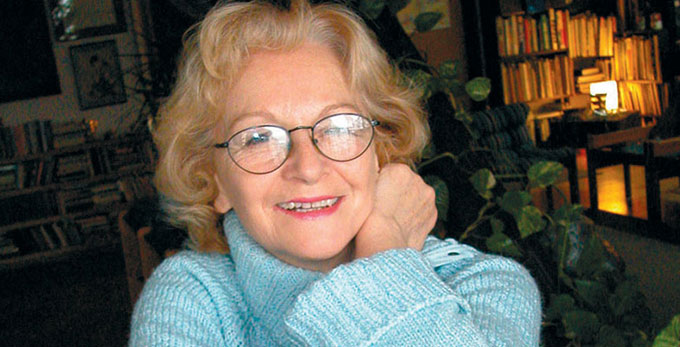 The Destruction of Normal Life Will Not Succeed!

In an attempt to define the traits of this elusive Spring 2021 – with the slow departure of COVID-19 (will it be for good?) - we feel a stable, decisive, albeit not quite turbulent enough, gathering of people across Serbia with the same or similar request: “We want a better quality of life!”

This beginning of a branched out “ecological uprising”, independent of political organizations, is the most evident and deepest sign that citizens have come to realize that a red line has been crossed and that institutions are “trapped”. The latter are not performing their duties, they are not looking after the public interest of the citizens or their right to participate in decision-making, especially when their health and living space is concerned.

The entire system of care for citizens has become meaningless. Their needs are not being taken care of: infrastructure, communication, primarily traffic, basic needs such as water supply and sewage, health centres, kindergartens and day care centres, senior citizens’ centres, as well as sports and recreation. Every constructive contact with the population has been eliminated, until they come together in revolt and stick to their requests. Professional opinions are not taken into consideration, such as the opinions of respected urban planners and architects. All actions are directed by a single centre of power, which is successfully hiding all relevant information about the city and its future. This is all being kept hidden like a state secret! Even the cost of the horrifically grandiose, terrible in its muddled conception, overcrowded with historical narratives: the statue of the founder of the Nemanjić dynasty. Erected at the now empty and cold Sava Square, it is primarily seen as a monument to the current ruler who is the one making all the decisions, getting angry at his fellow citizens, scolding them, threatening them with his mighty sword, which does not befit the humble monk Stefan Nemanja.

All this is reason enough to doubt the legality of these actions, to assume that personal interests with inevitable corruption is at play, including investments with hidden agendas on all levels. Responsible institutions allow this and thus contribute to the destruction of our lives, our nature and environment in general, our history and our culture. Great European cities are raising the percentage of green spaces by up to 50%, while the forests of Avala, Košutnjak, Zvezdara, the area around Barič are being cut down; the National Park Fruška Gora is being sold: hundreds of lots are now owned by private businesses, and even the sources of precious healing water are under attack. Illegal, huge buildings are being raised in areas such as Pančić's Peak on Kopaonik.

This is not just about the water, the land, the air, the forests, but about the maniacal need to pave parks, empty out city squares, change urban plans and build inappropriate residential-business buildings under the direction of investors who decide how our city will look, regardless of urban planning and at the cost of destroying entire protected urban and natural areas, not just individual historically and culturally precious houses. Belgrade is not the only city being terrorized by investors – but it seems that other cities in the world are a bit more successful in fending off the whims and profits of corrupt governments and their protégés. They talked about the “Green Miracle” – a “long park” from the Pančevo Bridge to Ušće, and it turned out that they were actually planning a line of tall residential buildings instead, which will actually cut off contact with the Danube. What is the logic behind this frantic building of residential agglomerations, when the number of Serbian citizens decreases each year – by about fifty thousand, or the population of an average town? Will all of Serbia move to the capital? 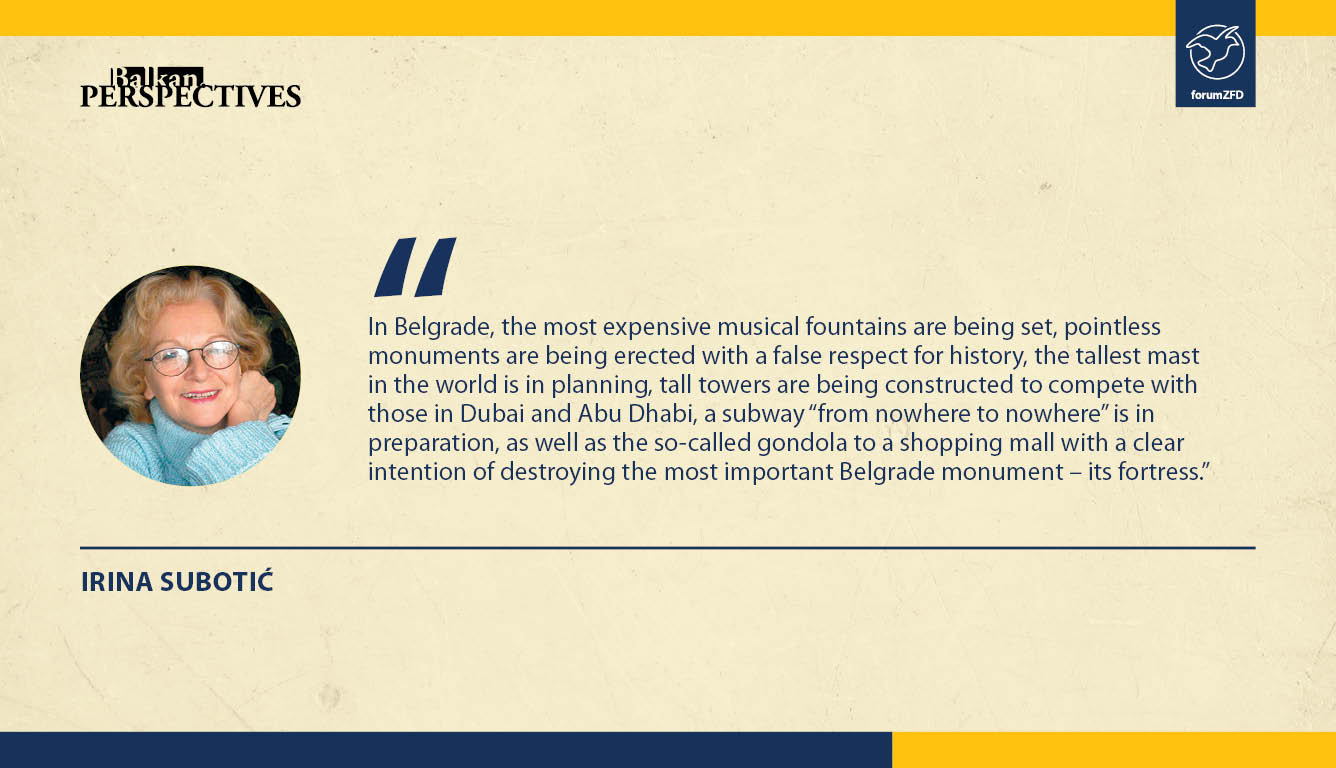 Intellectuals write about the systematic “eradication of European norms and standards.” Has anyone ever heard of some ruler from the Middle Ages having two streets and two monuments in the same city named after him – like Stefan Lazarević has in Belgrade? And yet, our capital does not have (an acceptable, equipped, completed) train station or central bus station: they are both out of order because of the illegal building of the entire Belgrade Waterfront complex which took over a huge part of the right bank of the Sava River, almost to its confluence with the Danube, the Gazela Bridge.

A series of non-transparent actions are connected to this megalomaniac project, intended for the most privileged citizens, which completely changes the view and perspective of our city with its crude, unimaginative residential agglomerations in the centre of the settlement, including the demolition of private property, the unknown investors, the unknown builders, the unclear plans, what is being built, who is buying and who paying.
The most expensive musical fountains are being set, pointless monuments are being erected with a false respect for history, the tallest mast in the world is in planning, tall towers are being constructed to compete with those in Dubai and Abu Dhabi, a subway “from nowhere to nowhere” is in preparation, as well as the so-called gondola to a shopping mall with a clear intention of destroying the most important Belgrade monument – its fortress. The towers of Golubac have already been “modernized” with inadequate interventions, and the Viminatium has become our antique Disneyland. Preparations are under way to destroy the surroundings of the oldest church of Saint Peter in Ras, and the prehistoric site Belo Brdo in Vinča is also under threat.

The Serbian Orthodox Church on the other end, and completely based on its own whims, will, taste, and ideologies, is changing the interiors of protected monasteries and temples, creating new surroundings with lots of fake sparkles, white and colourful marble, shamelessly and unscrupulously erasing the traces of our history and the beauty of the piled-up centuries. All this is enabled by the institutions in charge of protecting our heritage, under the excuse that the church is not under their jurisdiction.

Serbia is in chaos: thousands of uncontrolled landfills of non-degradable deposits of toxic waste, household appliances, plastic products; forests are being covered with construction debris, and large rivers polluted with faecal matter; clear mountain streams are pushed into pipes; dirty technologies of large industrial plants, especially owned by foreign companies, cause diseases and the death of thousands of people each year; many settlements have no sewage or water supply. The overcrowding of Belgrade without an adequate infrastructure and with daily traffic jams is proof that no one is looking after the quality of life.
Vojvodina is left without drinking water, primarily due to oil wells and spills. The sources of drinking water for the citizens of Belgrade living on Makiš are being threatened by excavators, the subway and new settlements with hundreds of thousands of inhabitants. The Great War Island is endangered - a green oasis with habitats of numerous migratory birds and other species. Mineral waters and spas throughout Serbia have been sold to foreigners, as well as the most fertile arable land - unless they have been reclassified as construction sites.

The fight to prevent the unscrupulous multinational Rio Tinto from poisoning the land and water throughout Serbia solely for its own profit, with false promises that the citizens of Serbia will benefit from it, is yet to come.
The new General Urban Plan (GUP) of Belgrade is being developed almost in secret; the brave author (or authors) who will provide the basis for the city planning by 2041 is not known. As far as we know, the job is not entrusted to professional teams or prominent specialists, instead everything is given to investors, who in the end make decisions about our lives. And the entire world knows their interests.
We can go on and on…
Therefore, it is not unusual that citizens all over Serbia are revolted: they feel like their lives are in danger, they are gathering, the groups are gradually growing, all in the same green direction, from all directions, with different problems, but always with the same message about a healthy life. This also unites numerous groups in Belgrade: in Vračar, Topolska Street, against the usurping of the left bank of the Sava river for the Belgrade Waterfront, against the destruction of Block 37 in New Belgrade or schoolyards in Zvezdara, the protected settlement Cerak Vinogradi, for the preservation of Kalemegdan, the Old Bridge, the Zemun riverbank, Gardoš, Topličin Venac, Vojvoda Vuk Park, the Dorćol trees, the bus line 28, green spaces around the "Pionir" hall.

There are countless examples of a growing number of citizens raising their voices – this is the only hope that the conditions for normal life in Serbia will be restored. Soon, we hope...

Irina Subotić (1941), an art historian and professor emeritus, teaches master's and doctoral studies in Belgrade, at the University of Arts (UNESCO Department) and in Novi Sad, at the Academy of Arts and the Department of Stage Design at the Faculty of Architecture. She worked as a curator for the Museum of Contemporary Art and for the National Museum in Belgrade for many years. She is member of several professional associations and civil society organizations: AICA, ICOM, Europa Nostra, Europa Nostra Serbia, and La Renaissance Française. Her special field of work and interests are modern art, avant-garde of the twenties, and non-institutional care for cultural heritage.