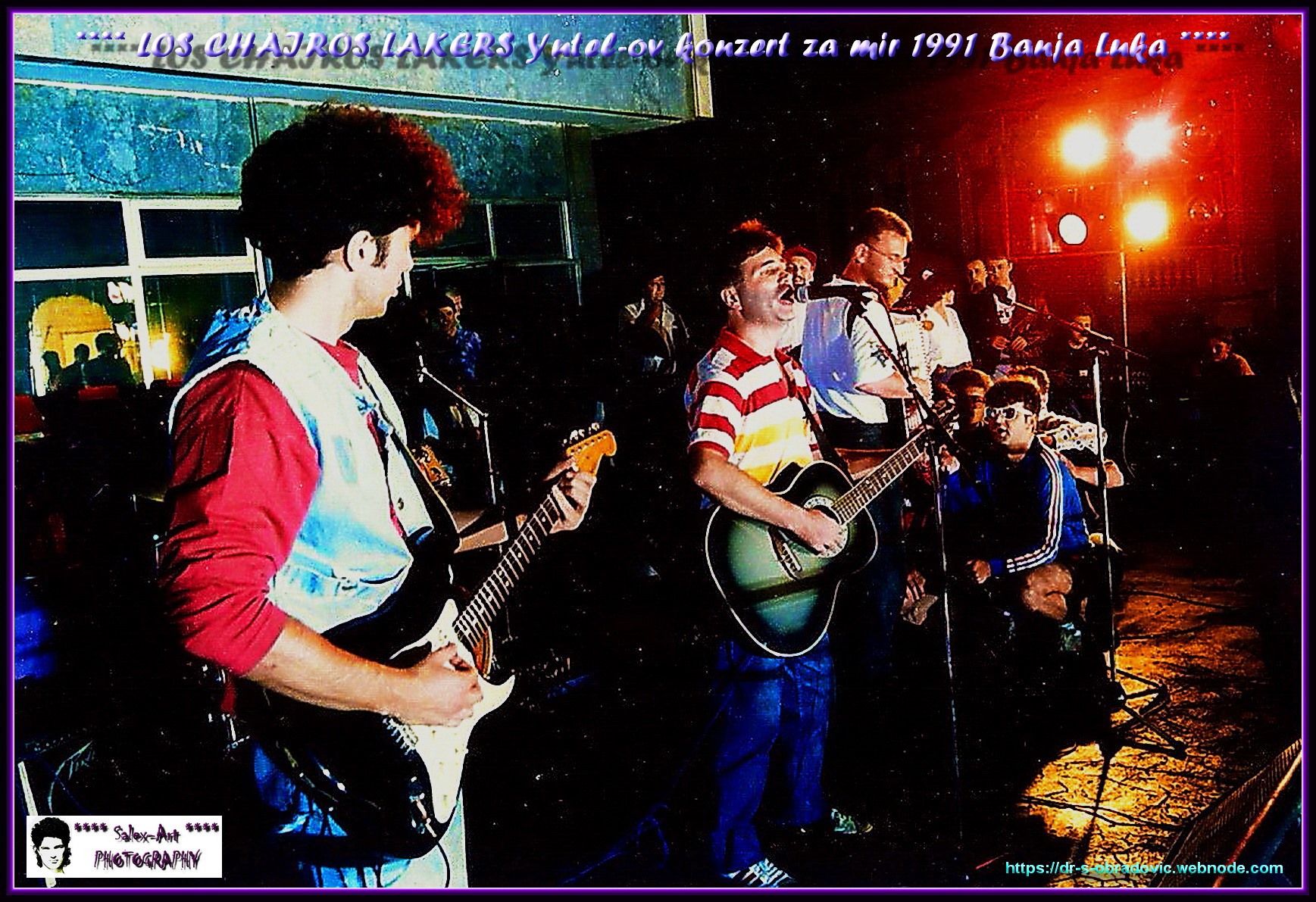 May 1988. The square outside the “Boska” department store. The square named after Edvard Kardelj, one of the most important and famous politicians from the socialist era, and a close associate of Josip Broz Tito. According to the estimates made back then by the media, around 40,000 Banja Luka residents gathered there, eagerly awaiting the arrival of FC “Borac”, the winner of the Maršal Tito Cup. “Borac” had won the final match against Belgrade’s “Red Star”. And there they were, the players and the leadership of “Borac”, with the big silver cup, coming out onto the balcony of the skyscraper containing a store of the Travnik company “Borac”. A chant could be heard across the square of Edvard Kardelj: “The white tulip blossoms, we took the Marshall Cup.”

Three years later, in August 1991, the square is still named after Edvard Kardelj. Tens of thousands of people in the square (the media says). Instead of “Borac” players, the balcony houses rock musicians, singers, actors, writers, and poets. Organized by the TV channel Yutel, after a concert in Sarajevo’s Zetra, the concert “Yutel for Peace” comes to Banja Luka. The event is supported by the Women’s Association of Banja Luka County and the Banja Luka Provisional Citizen’s Council. “People, come to this event for peace, to make the message together: Farewell to arms, let reason rule, let peace rule in every home”, the banner read. From the banner, saved by Saša Obradović, a musician from Banja Luka who gave a photo of it for this article, it is clear that the 24 August 1991 concert had many opening acts: an art exhibition, performances by cultural-artistic societies, a peace procession… 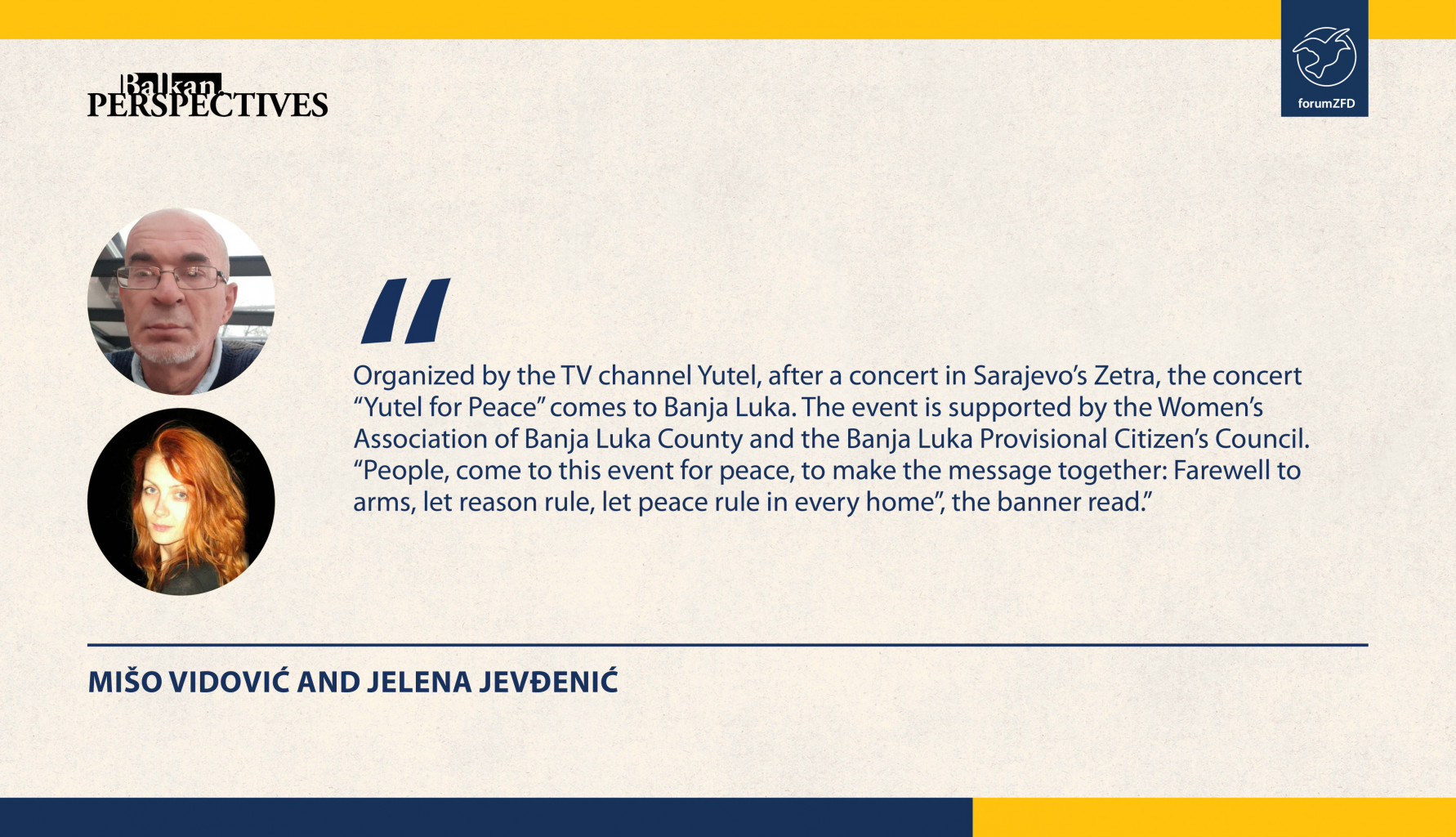 The guitarist Saša Obradović, who performed with the band “Los Chairos Lakers”, a sort of Banja Luka supergroup (formed by members of the bend “Dinar”, which published its first LP “When Dinar Comes to Power” six years before), recalled that there were so many bands playing that day that the concert, which started in the afternoon, lasted long into the night.

Muris Čengić, also one of the performing musicians, recalls the atmosphere in the city that day: It all started with collecting signatures around various cities. Everyone who was against the war signed up. I was one of those people walking around and collecting signatures. We managed to collect a huge number very quickly. Everyone signed that they were against the war: Croats, Serbs, Bosniaks. Absolutely everyone. I remember only one person who told us ‘what signature, go buy a gun’, but we took that as a joke. Then came the day of the gig at the top of the “Borac” – the “Yutel for Peace” concert. I was playing with the group “OK Jack”, Samir Bašić played bass, and the brothers Šahurić played guitar and drums. I sang. We had a concert before that in “Sebastijan” (a famous music venue in Banja Luka – auth.) with the same song list. James Brown’s “War” and “Aquarius” from Miloš Forman’s musical “Hair”. We practiced at home like we always did, in silence. We used acoustic instruments, and Hepi played drums on pillows. No mistake could be heard or missed due to distortion or the amplifiers. While traveling to “Borac”, I thought of The Beatles and their rooftop appearance. I got anxious, so I asked Denis if he were certain we would pull it through. He turned around, relaxed, and said: “I’d pull through even if I only went out there just with a guitar, I wouldn’t even need to play.” That was what I wanted to hear. We went up there confidently. The city was filled to the brim, a sea of people spread out before us. It was an amazing sight. Someone shouted my name, or maybe it just seemed that way? We played with gusto. It was the best experience of my life. Emir Tahirović, then a member of the band “Los Chairos Lakers”, also spoke about the atmosphere at the concert: We played two songs: “Jihav kozak” and “Marš svetaca”. I know we were amazed by the mass of people who were there at the concert. We had never played to such a big audience before. The first song was “Jihav kozak”. Tahir (Edin Tahirović Tahir Dinar, front man and singer of the band “Dinar”) did good with the choreography. We started to play, I sang the first verse, while the rest of the bands were hidden from the audience, and then when the chorus came, everyone came out with arms raised and they sang and danced together with us. Words cannot describe it, it was a shock to the audience, it was mad how surprised they were. The people were thrilled, applauding like they were in a trance. We had another song to play, and I picked “Marš svetaca”. They liked that one too.

Right before the concert, the people of Banja Luka who had gathered for years on the famous beach Studenac on the river Vrbas, organized an accompanying gathering with songs, cultural program, and other activities. Faruk Priliplija captured it all on camera (https://www.youtube.com/watch?v=LhSqQ_2NKIc). People from the Yutel TV channel were guests of honour at Studenac. Everyone who came to the concert was brought together by the vision that their presence could stop the war, nationalism, and killing.

For closure on this trip down the memory lane back to August 1991 in Banja Luka we will quote again the local musician Muris Čengić: Everyone who was there that night celebrated peace, brotherhood, love. The people of Bosnia and Herzegovina were not ready to accept what would come after. There are probably more of us who would love to turn back time and live in those moments again, back when we may have been naïve, but we were also unspoiled.

Jelena Jevđenić was born in 1985 in Banja Luka. She is a journalist and editor at the portal Impuls. She is an activist, and writer of poetry and prose. She has won several regional poetry prizes. She works and lives in Banja Luka.

Mišo Vidović was born in the early 1960s in Banja Luka. A long-time journalist, he started back in the ’80s, writing for youth outlets and papers. He has worked both in print and electronic media. Since 2006 he works at the Radio-Television of the Federation of Bosnia and Herzegovina as a journalist in the info-technical centre RTVFBiH in Banja Luka. He lives in Banja Luka.