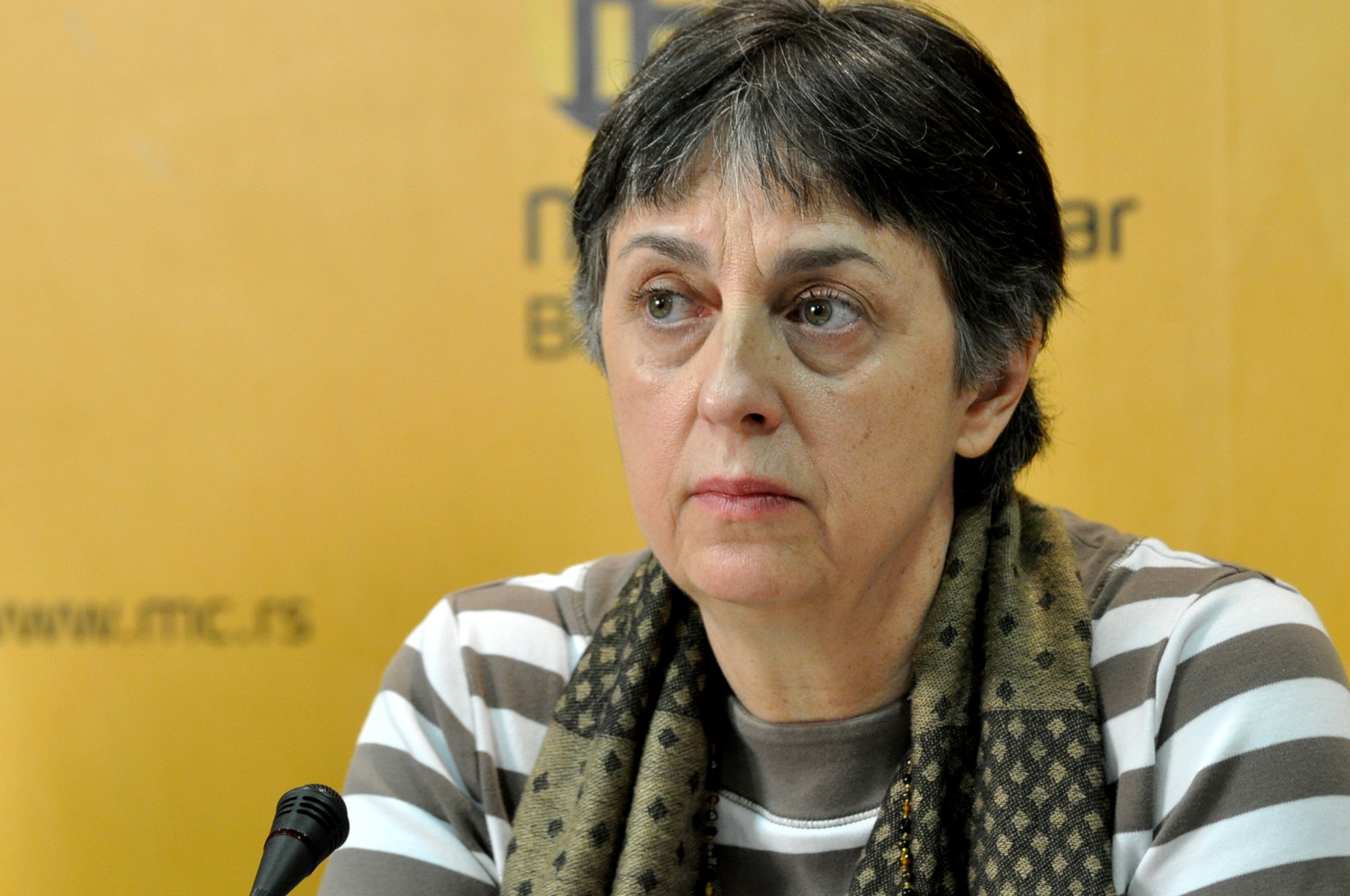 Antiwar Movement and Women in Serbia during the 1990s

Just a cursory glance at the available data concerning the anti-war movement during the breakup of Yugoslavia, between 1991 – 1999, will almost force upon us a conclusion that it was, for the most part, initiated and carried out by women.

To support of this claim it is worthwhile to highlight the women who deserve to be named, not only as anti-war activists, but as those who were - and some still are - the leaders of the civil society organizations which in the 1990s built the anti-war movement. In this text, we will briefly name some of the women who shaped anti-war resistance in Serbia:

Vesna Pešić[1], at the time an already prominent public figure, co-founded the Center for Antiwar Action in 1991; Staša Zajović[2] was the co-founder of Women in Black in 1991, and, more importantly, to date remains its spritus movens; Nataša Kandić[3] founded the Humanitarian Law Center to document war crimes in 1992, and in 2008 initiated the Regional Commission for the Establishment of the Facts about the War Crimes (RECOM); Lepa Mlađenović[4], after more than a decade of tireless activism in 1993 co-founded the Autonomous Women’s Center to fight violence against women; in 1994 Sonja Biserko[5] founded the Helsinki Committee for Human Rights; on January 1, 1995 Borka Pavićević[6] symbolically organized the first decontamination thereby initiating the myriad activities of the Center for Cultural Decontamination; in 1995 Jelena Šantić[7] set up Group 484 to aid that number of refugee families and more; Biljana Kovačević Vučo[8], after active participation in the Center for Anti-war Action and the Helsinki Committee for Human Rights, initiated in 1997 The Lawyers Committee for Human Rights (YUCOM). 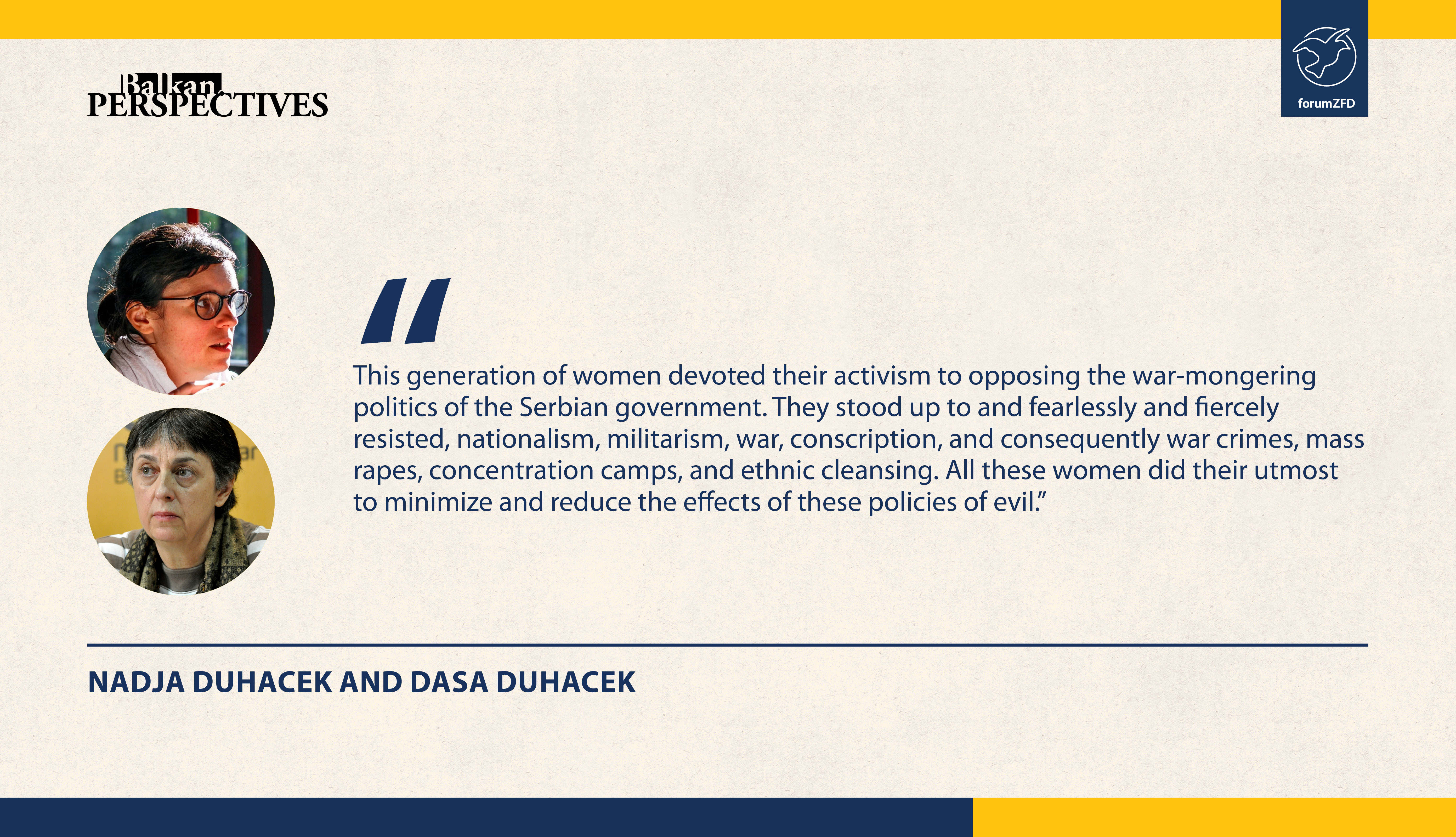 Importantly, as the women named here would certainly also insist, the movement itself not only included, but heavily relied on many other women whose names have yet to surface. On the other hand, there were women who did not necessarily lead the organizations, but played significant roles in so many anti-war initiatives of the 1990s, as activists, journalists, writers, theorists, historians, to name a few: Biljana Jovanović[9], Žarana Papić[10], Svetlana Slapšak[11], Latinka Perović[12], Olivera Milosavljević[13], Dubravka Stojanović[14], Mirjana Miočinović[15]... Other women, although not in leadership positions, left their own distinctive mark on anti-war activism. A case in point is Neda Božinović, a partisan of the WWII, who at the age of 70 joined the Women in Black to actively participate in anti-war and antimilitarist protests.

This generation of women devoted their activism to opposing the war-mongering politics of the Serbian government. They stood up to and fearlessly and fiercely resisted, nationalism, militarism, war, conscription, and consequently war crimes, mass rapes, concentration camps, and ethnic cleansing. All these women did their utmost to minimize and reduce the effects of these policies of evil. What was also common to all their activities, is their refusal to be restricted by any borders of the successor countries of Yugoslavia. On the contrary, these borders were a challenge they met despite the war operations and with full commitment to their goals. While crossing borders, they formed alliances with activists from Croatia, Bosnia, Kosovo, and Montenegro.

In some cases, besides clear antinationalist, antimilitarist standpoints, their activism was firmly grounded in a feminist perspective - Staša Zajović, Lepa Mlađenović, Žarana Papić, Svetlana Slapšak. All these women are the ones who should be recognized as those who made parallel history in the 90s, albeit each in her own way. This is especially important for the ones who are no longer with us and whose undoubtedly important legacy needs to be further explored and noted: Borka, Jelena, Biljana, Žarana, Neda, Olivera...

The explanation for why women played a crucial role in the anti-war movement of the 1990s can either be based on a familiar stereotype – which is as theoretically invalid as it is politically dangerous - that women are caring peacemakers „by nature“. This leads into an essentialist trap. Or, the explanation would require a complex, context-specific, in-depth social and political analysis, one which is yet to be elaborated. Here, we can just offer a rough outline so that this explanation can later be unfolded. The outline would firstly follow a general direction of the process of socialization of women, and secondly, it would be very important to further develop a concrete analysis of the conditions that shaped that socialization in the period of a specific framework of real socialism in Yugoslavia. That was the period when, immediately after WWII, women in Yugoslavia entered educational processes en masse, gained economic independence, started to master political literacy, and won the chance to decide about their own bodies.

Then, the generation of their daughters faced not only the breakup of Yugoslavia, but also the formation of the successor countries in brutal wars of the 1990s as they rallied around the anti-war movement. Although the fact remains that it was the women who organized and sustained this movement, there were also other, significant initiatives, not led only by women, but where women did play a part, such as the Belgrade Circle.

One of the key events that exemplified the continuity of the anti-war movement of the 1990s, its Yugoslav framework and its generational mark, spilled over into the following decades and the following century. All their activities were crystallized into the Women’s Court held in Sarajevo in May 2015. It was organized by the Women in Black, through a complex process that lasted several years, and it was grounded on women’s testimonies about the atrocities they survived in the 1990s. Now it remains a legacy of this generation of anti-war women activists.

Three decades after the first war started - in Slovenia, instead of being confronted with the responsibility for the wars in which Serbia actively participated, the general public here knows or understands even less. New generations are growing up, while the education system and the media are continuously providing twisted facts and nationalist narratives. When we read or listen to activists from the 1990s, we can understand that resistance to nationalism and war was precisely the process through which they became active citizens. Furthermore, activists and researchers, mostly from the civil society continue to explore, document and remind the public of war crimes, and more importantly of the wider context that led to the wars. Many of these activists and researchers are women belonging to different generations.

Daša Duhaček is one of the co-founders of the Center for Women’s Studies in Belgrade. She is a founder and a long-term director of the MA Program in Gender and Women’s Studies at the University of Belgrade, and a co-Director of the Feminist Critical Analysis course at the Inter-University Centre (IUC) in Dubrovnik. She has lectured at universities both at home and abroad, has lead research programs and has organized a number of international and local conferences. She is an activist of the Women in Black movement and was an active participant of the Women’s Court. Her fields of research are feminist political theory and philosophy, especially issues of responsibility, and the political theory of Hannah Arendt.

Nađa Duhaček is a feminist educator, researcher, and activist. She has graduated in South-East European Studies from the American University in Bulgaria and holds a joint master's degree in Women's and Gender Studies (GEMMA program) from the University of Granada and Institutum Studiorum Humanitatis, Ljubljana. Since 2016, she is the educational coordinator at the Center for Women’s Studies in Belgrade. Among other publications, she co-authored From Partisans to Housewives: Representation of Women in Yugoslav Cinema with Marijana Stojčić.