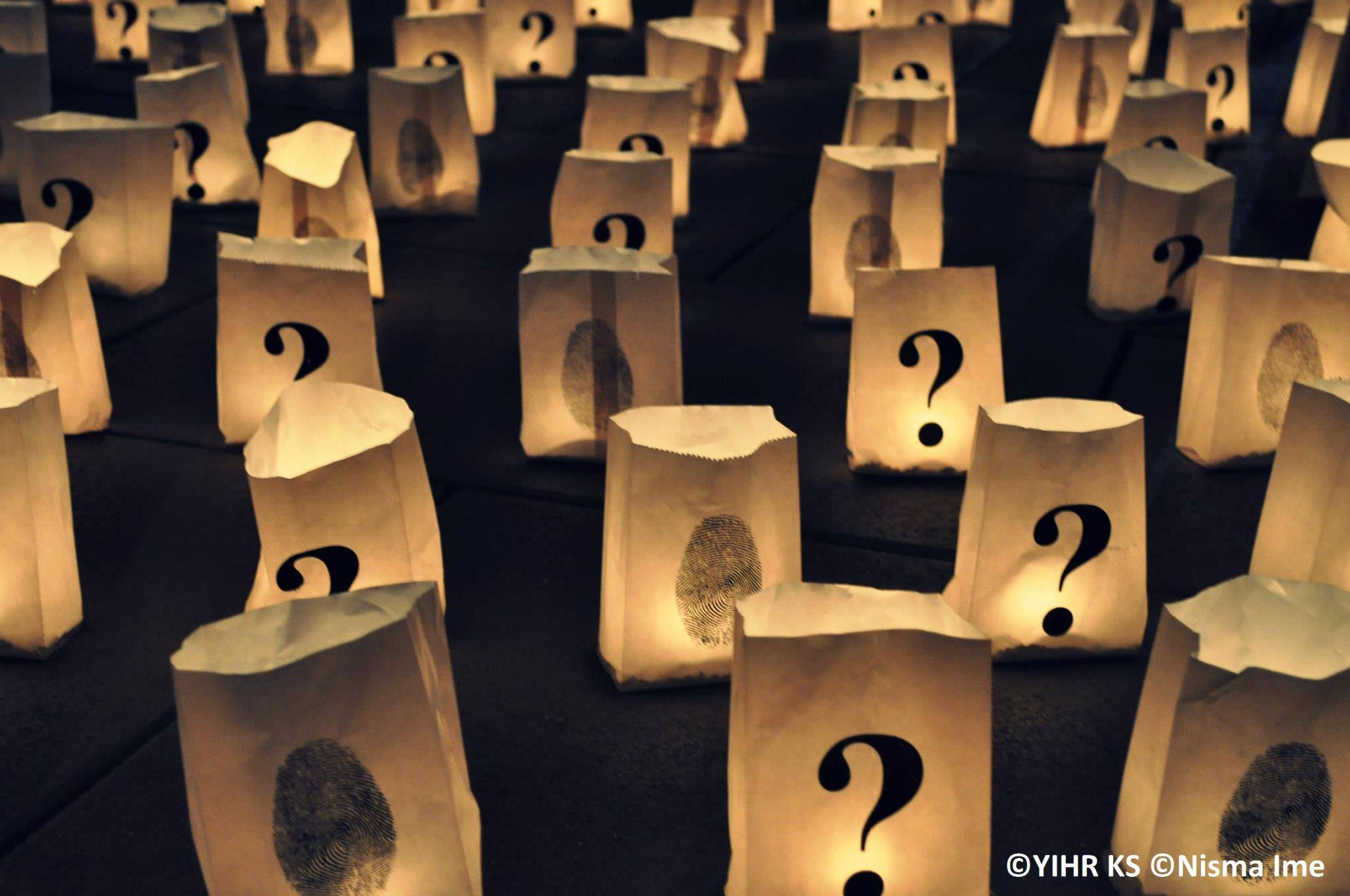 Personal Commemoration in the face of Public Oblivion

What exactly is the difference between past, present, and future? Most of us would perhaps argue that the answer to that question is an obvious one - the time before the moment we are living in, be it one second or thousands of years ago, is the past; this moment, now, is the present; and whatever is to come after this moment is the future. But when does the past end, and when does the future start? If this moment within which we are living is so short and we are moving in time faster than we breathe, how do we even seize the “present”? How do we build a “present” and how do we live in one “present” that can somehow be detached, if not from the past then, from the future? If the present is so blurry, as some might say, and we do not know if we can really control it, then we might at least have control over future events, since we cannot change what happened in the past.

However, when faced with traumatic events from the past, those events tend to shape our present, and hence, our future. Now imagine a life not being able to find that present moment when you would succeed in detaching yourself from those painful memories of the past. Imagine living a life that is solely a reflection of painful events you have no control over, a life of endless waiting, a life in a need of finding peace. For some, time froze in one of those painful moments in the past, and they are still in that moment, waiting.

This is the meaning of time for the families of missing persons in Kosovo. For them, the past, the present, and the future exist simultaneously, altogether a painful journey of endless waiting for answers on the whereabouts of their loved ones. Ferdonije Qerkezi is a woman whose husband and four sons are among the people who went missing in Kosovo. When recalling the events of that fateful day, she tells that what was supposed to be an hour of waiting for her loved ones to come back through the same door they had left, has turned out to be years of waiting. “That hour of those heartless criminals has lasted for 17 years now” Ferdonije says. Her hour of waiting is one that never ends, she is still living in that hour.

Two decades ago, 6,057 persons went missing in Kosovo as a consequence of the 1998-1999 war (regarded as armed conflict at the international level and as war by locals). Of these missing persons, 1,600 still have their whereabouts unknown, meaning families of 1,600 missing persons are living in the uncertainty of what happened to their loved ones. Finding answers is not their individual responsibility, although it has become their personal burden to resist the public oblivion into which the missing persons in Kosovo have been left. Under international humanitarian law, providing answers is the responsibility of the former parties involved in the conflict, however, the process of finding answers seems to have not been a priority for them.

Our nation’s memory, what we call “collective memory”, for the most part, is built around such traumatic events of the past. However, the hegemonic narratives of war and nationalism tend to construct and interpret a collective memory that remembers some but forgets others. The past in Kosovo, as Assmann (2010) argues, has been interpreted and used to construct a new national identity. In constructing this post-war national identity, there are only some categories that have made it to the public discourse of resistance and sacrifice. Missing persons tend to be regarded as passive victims, and hence are prone to being forgotten by the public institutions, as these institutions are the ones forming the way we construct and present collective memory. These institutions, although not denying the tragedy of missing persons, are constructing a binary storyline of collective memory that revolves around armed resistance and self-sacrifice, heroes and victims, and nothing in between, hence any other category that does not fit into this storyline is often disregarded.

The burden of commemorating missing persons and not allowing them to fall into public oblivion rests solely upon the families. They are transforming their pain into resistance, sharing their memory as a testimony of what has happened, and using their voice to make their stories heard. Their stories are proof that the missing ones are not an issue of the past. As long as they are not provided with answers about the fate of their loved ones, they will keep reminding the public institutions of their responsibility to find these answers. Individuals are not giving up even when public institutions seem to have already done so.

While the “missing” continue to be regarded as a number, rather than people with individual stories, and while the public institutions present their tragedy as “statistics”, their families are doing their utmost to deconstruct this and humanize the approach. Each of the “missing” has a name and a face, and if it wasn’t for the struggle of their families to remind us of that, we, the public, would most likely forget that one simple fact. To not let us forget the faces of the missing persons and to remind the National Assembly of its responsibility towards these persons, their families have placed pictures of those who are missing right in front of the National Assembly building. These pictures are still there on a banner - standing as a reminder of a past that is still so present. These pictures have established a concrete site for the families’ memory and mourning, just as the Wall of Memory in Gjakova, just as there are empty graves in the cemetery in Krusha e Madhe. All of these sites hold a place where public remembrance is absent and represent the need of the families to have answers about the whereabouts of their loved ones, in the hope to at least be able to bury their bodies, a very important ritual in our tradition.

Due to the need to share their painful memories and to find solace, and also to intensify their call for answers, the families of the “missing” have organized in groups such as “The Mothers’ Call” in Gjakova and “The Parents’ Voice” in Mitrovica. These groups have engaged in many protests in Prishtina and Gjakova and have used every which way to not stay quiet in the face of public silence. Their actions speak louder than a plain white obelisk that the Government has placed in the center of Prishtina, dedicated to the missing persons; an obelisk that does not have any official inscription, that does not even show what it represents. Perhaps only those who have placed it there know what it means.
When the government fails to create a public site of remembrance for the “missing”, and even regards them as a tragedy of the past, disregarding the very present tragedy of having no answers of their whereabouts, then the “missing” are deemed to be forgotten. Their families, however, are the ones who have not left this tragedy in the past, and who are still, to this day, living with the pain of not having any answers. The families are the ones reminding us about the very presence of the past. And if one might not understand anything about the missing persons from the obelisk in Prishtina, and if one might not understand how it feels to be living in the past, one would for sure understand if ever they visited the house-museum of Ferdonije Qerkezi in Gjakova. She lost her husband and her four sons in the afternoon of 27 March 1999. Still to this day, she cannot detach herself from that afternoon. She lives there, in that 6pm of an afternoon, which has lasted for so many years now. She can recall the series of events that afternoon as if they happened a day ago. When recounting her story, telling it over and over, she recalls the Serb military telling her they would only keep her family for an hour and then let them go. She did not know, though, that it was at this exact moment her endless wait would begin. If only she knew that time would stop for her then. She shares details that we will not encounter otherwise in any public medium. Her youngest son, Edmond, only 14-years old, had been sleeping behind her back when they came back for him. She remembers the clothes of her sons and husband; the things they liked, their dreams, their hopes. Ferdonije has decided to use her pain and her existence to stand as a living testimony of what happened, to “live to tell” as she says. Besides her struggle to keep the memory of her family alive, she has had to face the cruel reality of being a woman in a patriarchal society, having had to also fight to maintain the property rights of the house where she established her family and which holds all of their memories. Ferdonija wanted to be able to keep her house and maintain it as it was on the day her family left for the last time, to keep it that way so she can feel like she is still living with them, and so that others can see and feel their memory more closely. Her house is currently the only house-museum of for missing persons in Kosovo. Now her house and her voice have transcended her individual struggle, and her individual journey has been brought to national and even international attention. Her house and her voice have become links to the past, reminding us how present her pain and the pain of all the families of the missing persons is. She is bringing the “past” to our present and not allowing us to forget.  What public institutions have failed to do, a woman in pain is undertaking as a force of her own.