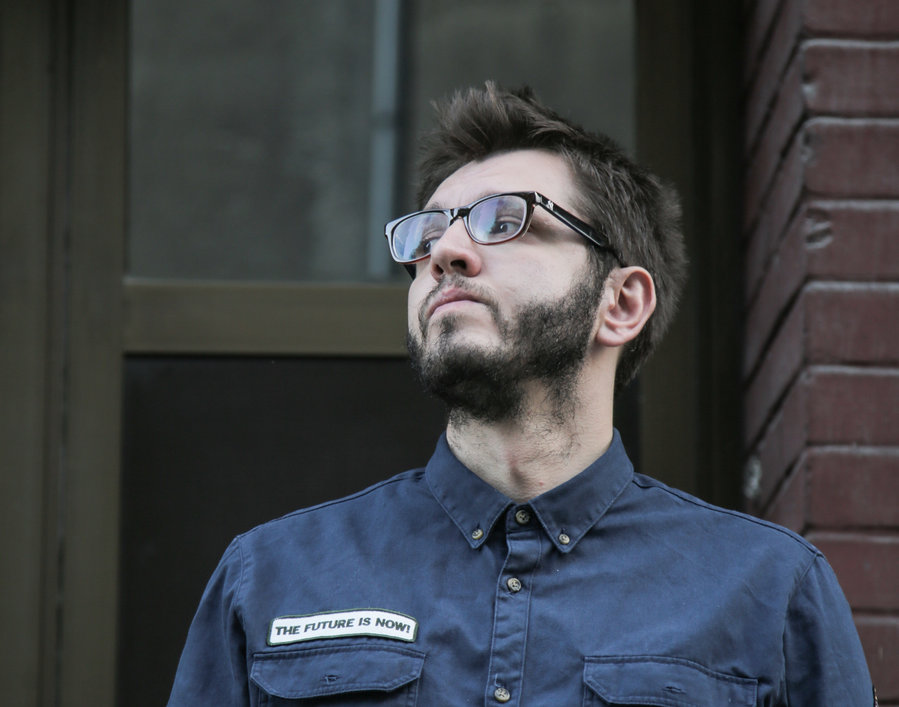 Wake me up when it ends

There may be more beautiful times, but this one is ours – JEAN-PAUL SARTRE

I was dreaming about myself as a boy with a red scarf around my neck, while I was carrying the torch for comrade Tito. The bright blue shopping centre Sarajka instead of BBI, which is the only thing from the pre-war period I remember. I remember that I ate strawberry ice-cream in a cup there and that’s it. Everything else seemed the same, except maybe that out of the corner of my eye I noticed a green monument in the park. I was leading the file, and behind me, there were hundreds of children, all of them wearing blue caps, red scarfs and white shirts. Laughing like nobody before. And singing loudly, but for some reason, I could not hear their voices. I was looking around and nervously searching for well-known faces in the audience, like Malik from the film Otac na službenom putu. I could not find anyone, but I did not give up, in spite of the fear that paralysed by legs and hands. There was something strange about it all, and the atmosphere suddenly changed from cheerful to dark, although sun was still shining upon Sarajka. At the moment when I was supposed to approach the location and hand over the torch, a shell hit the ground. That is the moment when dreams end, but this continued for a sufficient period of time so I could see dismembered children’s bodies, white shirts drenched in hot blood and red colour absorbing the blue one. And the shell, with nuances of the three-striped flag with a five-pointed star in the middle. I laughed aloud after I finally opened my eyes, trying to cover up the horror that was seizing me. Throughout the day, I was unable to become fully awake, and I somehow had the feeling that I was still living in that dream, even when I personally went to the Square of the Children of Sarajevo in order to make sure that there were no traces of blood. The night after that I was unable to sleep.

I soon understood that my dream was a consequence of hours of reading the sci-fi series called Darkness, in which protagonists travel in time, and a dinner at my parents’ place, followed by meal digestion assisted by discussions about better times. Those during Tito’s regime. During the whole discussion, I was trying to convince my parents that I live now and here and that their stories about the past are killing my present and only making the current reality even uglier, no matter how terrible it already was. Such violent pushing of youth into the capsule of memory of older persons and beaming of our tired minds into some idyllic youth is nothing else but taking away our youth, which is anyway irretrievable. The typical stories about past times, when one could sleep on a bench, and today it is impossible because of crime, migrants or poor quality of benches themselves, stories about buying jeans in Trieste, and my favourite one, about the perfect co-existence of Muslims, Serbs and Croats, are a call for youth to give up on their lives. Because, why should one try to do something, why should one work, create, if all of it is in vain, and if in the end, we will never again be able to sleep on a bench, why even live, if it is easier to remember? And that even without using one’s own memories, but rather going back to someone else’s, so far and imaginary that they are more difficult to believe in than fairy tales about chocolate houses and marmalade roofs. Due to all of this it is clear why it is wrong to forcibly bring a memory back to life and impose it on new generations that do not understand it or do not wish to understand it. We simply cannot live in the memories of our parents, because in our minds, they were killed with the first victim and with the first blood drop that was spilled, the first killed child that could have been any of us, but due to mere luck we were not.

However, in spite of everything, a large part of youth in Bosnia and Herzegovina, radically more than their peers in Serbia, Croatia or Slovenia, who, as opposed to their parents back then, obviously do not wish to bring back Yugoslavia at any price, gladly accept stories about better times back then and the current ugliness of their own faith. They themselves bring back Tito in songs, on T-shirts, they include him in their opinions about life and politics, which, of course, is legitimate, just as any other personal choice, but is devastating for the creation of the overall social make-up in Bosnia and Herzegovina. The country was built by those generations of Tito, who are the most responsible ones for its horrendous transformation, and youth accept and bring back such memories, although they have not lived in them for even a second, so that the country becomes an undesirable region that a young person can only leave. And youth do leave. Mostly without looking back and searching for a new sun that will heal their broken hearts. While some continue living their lives somewhere far away and leave Bosnia and Herzegovina in peace, others continue mourning for Yugoslavia and analysing the social and political situation in their former country from comfortable Swedish, Swiss or German armchairs on a daily basis.

Also, I have to be completely honest and say that I used to believe the stories about the Yugoslavian fairy-tale and I wore T-shirts with the red five-pointed star, dreamed about brotherhood and unity, thought and personally created new representations of Yugoslavia, but then I grew up, stopped feeling sorry for myself and went on. Besides, I did it just like any other young man on planet Earth, whose country underwent certain changes. Because let us try to imagine a German who is trashing today’s Germany and nostalgic about the socialist times. The same goes for a Russian or a Ukrainian. They decided to leave behind the past, which is not theirs, and create the present in which they wish to live and wait for the future. Because it is much easier to go forward if you are not looking back over your shoulder, even if the whole society is persistently doing it.

In order to face the imposed memories and present how wrong it is to relive them, I wrote a drama entitled Wake me up when it ends. It got an award for the best modern engaged text at the Fourth Heartefact call and it is actually a call for my sleeping generation to wake up from the dream that their parents lulled them into. In the drama, just as in this text, I absolutely have no intention to criticise the former country or system, but I rather wish to show man, an individual, who, torn between the impossibility to leave the past and fear from a terrible and dark present, forgets about himself, his happiness and feelings, the true meaning of love. My drama focuses on a family consisting of a Mother, Sister, Brother and Grandfather, which has been held captive in the past by the Father for the past twenty years, a past in which Yugoslavia has not dissolved, and Tito is still alive. „Outside, there is pure evil now. Nothing beautiful remains. We thought that it would be more beautiful for you here. Our childhood was beautiful. We had to keep the family happy“, says Father to the Daughter who is pointing a gun at him. „Everything was a lie“, says she. A small, seemingly happy family is actually at a crossroads and must decide whether they will stay in memories, which are dying, just like the Grandfather, who is the only one who saw the real Tito, or go out and face the evil that is much more terrible and dangerous, filled with turbofolk, nationalism and hatred, but at least free from the shackles of past lives. Finally, just as during the 90s, a violent love has a violent end.

„And life rushed by, as if I had never lived… Let me lie down a little… And there is no strength, nothing has left, nothing… Hey, you… smudgy one!... What an ugly dream. Really ugly. Close your eyes“, says the Grandfather at the end and lies motionless.

Mirza Skenderagić (1986) published a large number of texts, studies, essays, film, literary and theatre reviews, recensions, interviews and short stories. He is currently a member of the editor’s board of the drama and documentary programme of Radio BiH. In 2014, he was awarded a scholarship by the Foundation Karim Zaimović for the drama “Wake me up when it ends“. In 2016, he won the Heartefact award for the best regional modern engaged drama text. His documentary entitled “I can speak” won the Golden Apple award during the Bosnian and Herzegovinian Film Festival in New York and recognition during the Pravo Ljudski Film Festival in 2016.