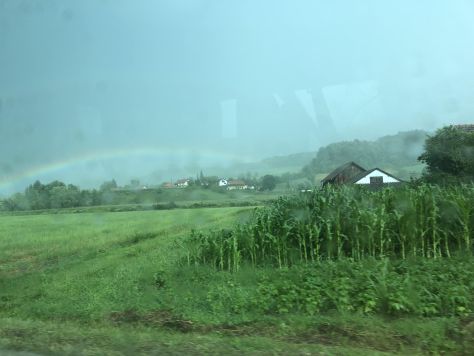 It’s 2004 and I am 7. I have an Amstrad emailing device in my room which Dad uses to send me messages. I don’t remember knowing where he was sending them from, although I’m sure I was told. I guess I am not particularly interested. His absence feels very normal. The Amstrad device however feels a bit alien, emitting a dull glow in my room at night. I uncover it years later in the dampness of our garage and it’s like breaking open a time capsule.

Now it’s 2019 and WhatsApp has replaced the Amstrad; and whilst we don’t talk that regularly I’m not surprised when Dad’s name flashes across my screen. I’m nearing the end of an incredible week in Bosnia; I explain to him where I am and he rapidly types. The message that flashes across my screen is a question. Did I know that he spent 6 months working on the Milosevic trial at The Hague in 2004?

I don’t reply for a while. I didn’t expect to have any (albeit very distant) personal link with the history and peace-building process we’ve been exploring on the programme for the last week. A couple of days later when I need to write this blog, I decide to ring him.

I note that the results from the community survey last year indicated that the majority of respondents didn’t think the tribunal aided peace building. I ask if he thinks this is indicative of a failure on the part of the tribunal? He answers affirmatively: the law is a creature of consent, and if the majority of people do not believe the law has delivered, the process is malfunctioning.

I ask why he thinks the tribunal failed and he isolates three key points. I would stress that this is just his opinion, other people who worked on the tribunal may have very different views. This is also my summarising of the discussion, which will have compromised some of the nuances.

The third point is the one that arrests me. We’ve spoken a lot during this trip about the conflicting war narratives and stories, so I’m interested in this ‘meandering storytelling’. I wonder if this process contributed to (or at least failed to counter) the absence of a unified narrative about the war. I ask him to elaborate.

He describes how the trials within the tribunal operated like parallel worlds, each with their own conflicting rhetoric and ideology. I ask if there was any attempt to unite the narratives (or at least place them together for comparison) in some written report after the tribunal? He says no – every trial was rowing a boat in its own direction. He adds that perhaps an inquiry would have been the better starting point. An inquiry could have collected and presented the various narratives of the war and begun to indicate instances of criminality which could inform later prosecutions.

I’m interested in how the narratives created in the trials were disseminated. Were the stories told there only heard by the courtrooms? Apparently there are films in public archives, but otherwise the content wasn’t spread.

When I started to think about the blog post I wanted to write about the Most Mira Picturing Climate Theatre project, and again now my thoughts turn to theatre’s role in post-conflict relationships. UK based theatre director Nicholas Kent developed a practice in the 1990s of staging what he termed ‘Tribunal Plays’. A former journalist, he produced shortened and accessible re-enactments of tribunals, including Nuremberg and indeed Srebrenica to try and aid public understanding of the proceedings. I wonder if stagings of excerpts of The Hague tribunals for the former Yugoslavia could be a useful platform to open up the transitional justice process and facilitate productive dialogues with local people. But if the tribunals are as rhetoric filled as Dad implied, this may serve to be more divisive. And that’s without even considering the politics involved in editing and cutting down the transcript of those trials – which stories and voices get cut? Perhaps a different approach is required. Could playback theatre (where the audience share stories, which are then enacted by actors) have a function? Or are these stories too painful, and still too divisive, for this technique?

I do believe theatre can play an important role in building strong communities and instigating social change – but whether it is the right tool to help foster a unified history is an unanswered question. I think Most Mira’s work generating dialogue and friendship between young people, through the ‘Trojan horse’ of theatre is fantastic and appears to be creating genuine positive change. Perhaps it is this approach that is the best application of theatre. I like that it’s not seeking to make any huge narrative changes immediately, instead working to counter prejudice and unite young people in friendship so that in the future they can tackle that lengthy work together. I feel very grateful for how much my understanding of applied theatre has expanded on this trip; and for all the conversations and quiet thinking it has inspired.

We end the phone call, I scrawl some writing down and then join my new friends in a bar down the road. It’s been a good week.