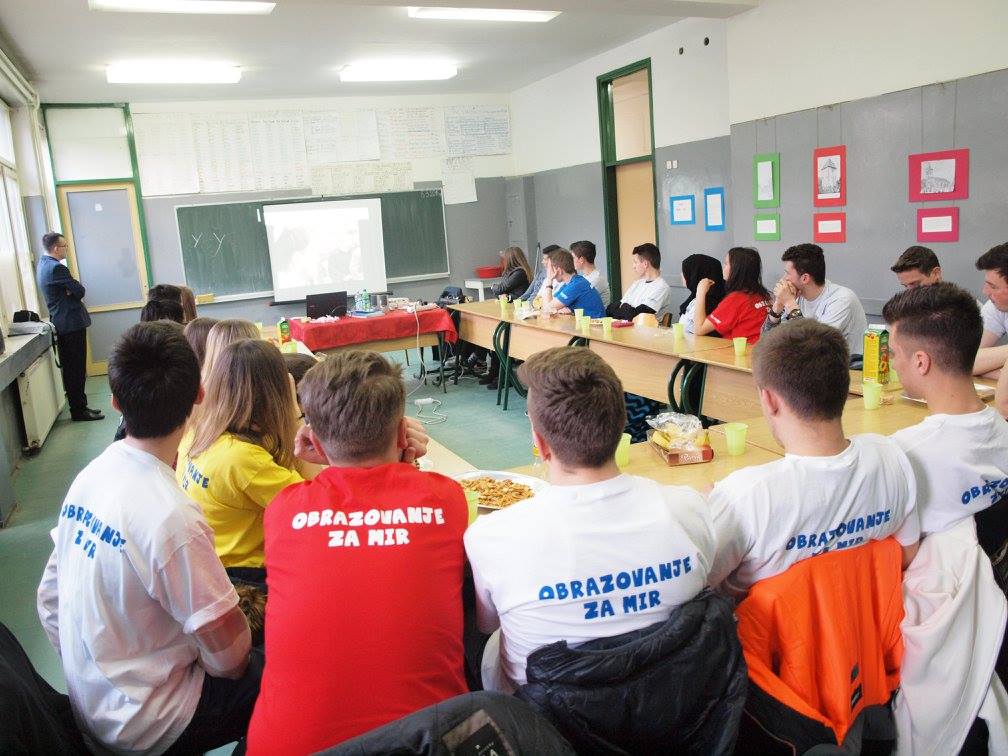 A CHANCE TO DEVELOP CRITICAL THINKING

Educational institutions have become places of intolerance in Bosnia and Herzegovina. That's why initiatives like the “Education for Peace” project are very much needed, writes Aleksandra Letić, programme manager of the Helsinki Committee for Human Rights

Although the war in Bosnia and Herzegovina ended 22 years ago, its consequences are still very visible in all segments of society. Painful war experiences, political crises and poverty have resulted in chauvinism, ethnic animosities, xenophobia, intolerance and discrimination becoming the dominant model of behaviour and thinking. Local communities, as basic cells of social interaction, are still separated. While the country has made some progress in terms of reforms towards a democratisation of the society, Bosnia and Herzegovina remains deeply divided along ethnic and political lines, which in turns paves the way for further radicalisation and even extremism.

These divisions have direct implications for the daily lives of citizens, especially the development of the personalities and attitudes of younger generations, who cannot recall periods of peaceful coexistence, but rather remember only periods of tension, conflict and division. Growing up in mono-ethnic communities, where everything related to the dominant ethnic group is glorified and the existence of ''others'' is minimised or fully ignored, makes young people unable to perceive a future of peaceful coexistence. Instead, it constitutes a firm basis for an intolerant, closed, wary, even violent relationship based on prejudice and stereotypes towards those who do not belong to “their” group.

At the same time, processes of dealing with the past – which recognise established facts on crimes, understand conflict patterns, demystify battles and war heroes, deconstruct narratives of past and current conflict generators – are of sporadic nature and exclusively present only in the area of civil society activities. Few national and international NGOs are trying to bolster capacity building in the educational system of Bosnia and Herzegovina to enable it to sustain the complexity of the process of facing the violent past and taking distance from it. However, such attempts are mostly isolated, short-term and without any significant institutional support.

Instead of supporting such approaches, educational institutions, which are the most responsible ones for ''instilling'' skills needed for building and preserving peace in young generations, have become new places of divisions, intolerance, ethnocentrism and distrust. The teaching materials covered in secondary schools are mostly focused on the history and culture of the dominant ethnic and religious community, without any critical assessment or challenging of events or actors from their own ethnic and religious group. Institutional approaches towards studying the recent violent past, are almost non-existent.

Schools are not only following political agendas and matrices in Bosnia and Herzegovina, they are also putting themselves in a position in which they are a means for manipulating facts and history. They have become places where inhumane acts are protected and justified and therefor make a post-conflict social revival impossible. The task of objectively dealing with the past in order to create a better common future and foster intercultural understanding, requires a critical mind, which challenges and explores, as well as asks sensitive, but crucial questions to those around it. Such a spirit would need to be created at schools, but is something that is rarely found these days at educational institutions in Bosnia and Herzegovina.

So, the fact that the general society and politics are ignoring activities focused on dealing with the past and peace building has a direct impact on the manner in which the educational system is addressing such topics. In consequence, young people are increasingly prone to reproducing hate, intolerance, inter-ethnic and inter-religious fear, segregation and even supporting conflict generators at the local and national level. Ignoring the need to open sensitive and painful topics from the recent past for discussion, especially among youth and especially as part of formal education, is closing the door for possibilities to achieve positive social changes over the long term, something that is more than needed, if we wish to progress.

The project ''Education for Peace'', implemented by the Helsinki Committee for Human Rights over the past years, aims to restore the educational function of schools through cooperation with teachers. It contributes to their capacity building in terms of dealing with the past and tries to enable them to initiate a critical dialogue about the past among youth. We are deeply convinced that honest teachers understand the importance of such a dialogue, but also their own role in it.

Changes have to occur at institutional, personal and structural levels. We believe that teachers that have acquired skills related to peace building, intercultural cooperation and reconciliation have the ability to create innovative classes. They can become advocates of positive change and teach students about crucial values for a peaceful coexistence in Bosnia and Herzegovina based on their own example. We believe that young people who have a chance to learn about the past in an unbiased manner, to understand and contextualise facts on patterns and policies of crimes that were committed, have a chance to develop critical thinking. This does not endanger their identities, but rather leads the way to dialogue, cooperation, respect and understanding. We believe that schools that apply peace building methods, reconciliation and intercultural understanding will become better places for learning and socialising. Over time they will become what they should have been from the beginning, namely educational institutions that educate young generations in order to make them conscious and able individuals. These individuals will shape our country in the future and make it a pleasant place to live in for all its citizens.