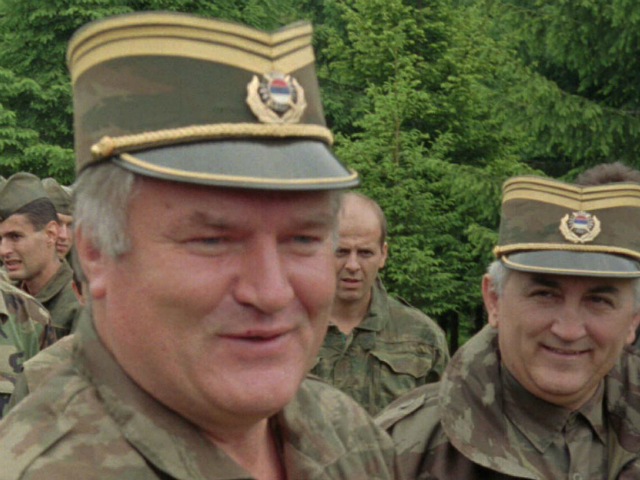 The UN court in The Hague convicted former Bosnian Serb military chief Ratko Mladic of the genocide of Bosniaks from Srebrenica, war crimes and crimes against humanity, and sentenced him to life imprisonment.

The International Criminal Tribunal for the Former Yugoslavia found former Bosnian Serb Army commander Ratko Mladic guilty on Wednesday of genocide and crimes against humanity, convicting him of some of the worst atrocities in Europe since World War II and jailing him for life.

Mladic, 74, was convicted of genocide in Srebrenica in 1995, the persecution and extermination of Bosniaks and Croats across the country, terrorising the population of Sarajevo with a campaign of shelling and sniper attacks, and taking UN peacekeepers hostage.

But he was acquitted of committing genocide in six other Bosnian municipalities in 1992.

“The crimes committed rank among the most heinous known to humankind, and include genocide and extermination as a crime against humanity,” said judge Alphons Orie as he announced the life sentence.

Mladic was removed from the courtroom at one point after he disrupted proceedings by shouting at the judges.

He became angry after they refused his defence lawyer’s request to cut short the proceedings because of his high blood pressure.

Judge Orie said that after a marathon trial which lasted four years, Hague Tribunal prosecutors had proved that Mladic was involved in a joint criminal enterprise whose goal was to kill Bosniaks in Srebrenica in 1995.

Orie said that Bosnian Serb forces were given orders by the defendant who was in the field on July 11, 1995 when Serb troops and police overran the UN ‘safe area’ and subsequently killed more than Bosniak 7,000 men and boys.

“Mladic had effective control over both members of police and military who committed crimes. Without his actions the aim of the joint criminal enterprise would not have been achieved in the same way,” the judge said.

Orie also highlighted Mladic’s words to Bosniaks who met him in the days after Srebrenica was taken, when he said that Bosniaks could either “survive or disappear”. According to the judge, statements like this showed his intent.

Former Bosnian Serb President Radovan Karadzic – who was sentenced to 40 years in prison for genocide and crimes against humanity last year – gave an order to create “impossible living conditions” for Bosniaks in Srebrenica, then Mladic “implemented these orders”, said Orie.

He explained that the campaign of massacres in was organised and systematic, as was the attempt by Mladic to hide the crime, by hiding the mass graves.

“The Bosnian Serb forces tried to hide the [Srebrenica] crime, by digging up and reburying Bosniak victims in mass graves,” said the judge. “Their attempt... ultimately failed.”

On the second genocide count - genocide in 1992 in six other Bosnian municipalities - Orie said that the court found that mass crimes did take place and there was “a plan to destroy” Bosniaks.

However, he added, the targeted group represented a “relatively small number of the protected group of Bosniaks in total”.

During the siege of Sarajevo, Orie said the Bosnian Serb Army’s Sarajevo Romanija-Corps “intended to spread terror among the population of Sarajevo”.

“The city was indiscriminately attacked,” he said.

The judges found that Mladic exercised “direct” control over members of the Sarajevo-Romanija Corps who committed the atrocities.

In relation to the accusation that Mladic was responsible for taking UN peacekeepers hostage, Orie said that there was a joint criminal enterprise to detain UN officials and hold them in specific areas to stop NATO attacking Bosnian Serb positions.

The court found that Mladic ordered his subordinates to hold the UN peacekeepers.

Sentencing Mladic to life in prison, Orie said that the defence had suggested that Mladic’s “benevolent treatment” of some war victims, as well as his “good character and diminished mental capacity, poor physical health and advanced age” should be seen as mitigating factors.

However, Oric said, these factors “carry little or no weight” in determining the sentence.

Wednesday’s first-instance verdict is not final and can be appealed, and Mladic’s legal team has already announced that it will launch an appeal.

“We will certainly appeal and it will be successful,” Mladic’s lawyer Dragan Ivetic told media.