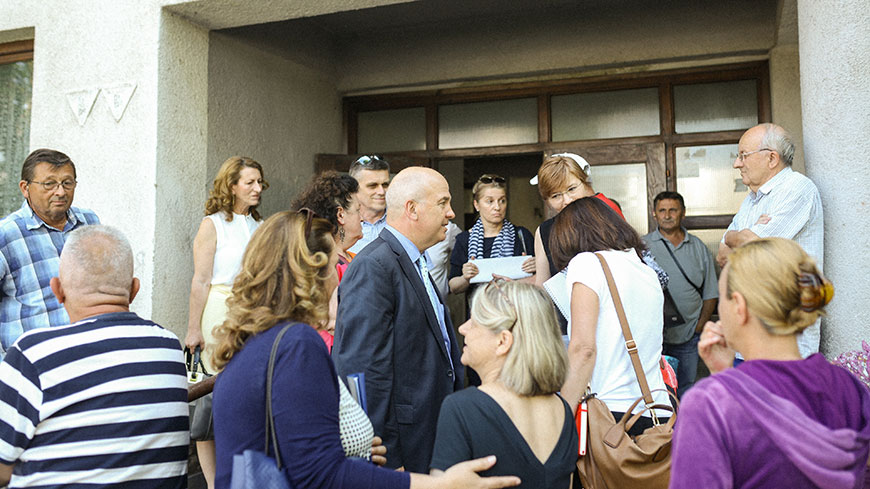 “Deeply ingrained ethnic divisions and lack of a common vision of reconciliation and development still hamper the construction of a tolerant and cohesive society in Bosnia and Herzegovina more than 20 years after the war. The country has not yet managed to overcome its violent past and a number of victims, in particular families of missing persons and victims of war crimes of sexual violence, are denied justice. The authorities at all levels are called upon to redouble their efforts to ensure that all wartime victims are provided with adequate protection and support. A human rights approach needs to be systematically pursued, which would include all victims in all processes concerning redress” said today Nils Muižnieks, the Council of Europe Commissioner for Human Rights following a four-day visit to Bosnia and Herzegovina, focusing on issues relating to transitional justice and to media freedom.

Noting with interest the progress made in establishing the fate of persons who went missing during the 1990s’ war, the Commissioner remains concerned that more than 6 800 persons are still unaccounted for. The urgency of the closure of this painful post-war chapter cannot be overstated given that family members of missing persons, some of whom the Commissioner met during his visit, are passing away without knowing the fate of their loved ones. Conscious of the importance of regional co-operation in this context, the Commissioner is pleased to note  that Bosnia and Herzegovina signed in 2015 with Serbia a co-operation protocol on the search for missing persons and that similar agreements are planned to be signed soon with Croatia and Montenegro. He calls on Bosnia and Herzegovina to establish the long-awaited missing persons fund, and to fully and promptly comply with its international obligations in this context stemming notably from the relevant decisions of the UN Human Rights Committee. All governments in the region are urged to put this fundamental human rights issue high on their agendas.

The Commissioner also notes certain progress in the field of criminal justice, such as a slightly increased number of domestic prosecutions of war related crimes of sexual violence. Efforts in this field need to be sustained and adequate protection of and support to witnesses need to be fully ensured before all domestic courts.  Commissioner Muižnieks regrets that the authorities have not yet established an adequate and effective mechanism that would ensure reparation to all victims of war related crimes and their families and invites them to address this issue urgently.

The Commissioner is dismayed that generations of children in Bosnia and Herzegovina have been educated in 36 segregated schools with little or no interaction of children from other ethnic groups. By failing to abolish the system of ‘two schools under one roof’ and mono-ethnic schools, and to use education as a tool to promote reconciliation, ethnic polarization has been exacerbated. “I am encouraged by developments in Jajce, where high school students recently stood up for their rights and demanded integrated education. I hope that this initiative will evolve into a broader movement which will bring about the necessary changes in education upon which the country’s future depends” said the Commissioner.

Even though more than 20 years have passed since the war, approximately 98 000 persons still remain displaced in Bosnia and Herzegovina, some of them living in deplorable conditions in the remaining 121 collective centres, including the one in Hrasnica, Sarajevo, which the Commissioner visited. While significant efforts have been made in ensuring access to housing for forcibly displaced persons, a number of issues relating to security and access to social and economic rights remain to be addressed in order to make returns sustainable. Having noted with serious concern reports about violence and hate crimes against returnees, the Commissioner underscores the need for effective investigation and prosecution of such crimes and for enhancing human rights awareness of members of the law enforcement and the judiciary.

As concerns media freedoms, the Commissioner is concerned that various means of pressure, such as defamation, are used against journalists throughout the country to silence them and prevent them from investigating and reporting on important topics of public interest, such as dealing with the past, corruption and organised crime. Physical attacks and threats against journalists are rarely prosecuted and seem to have been accepted or even justified by parts of the population. The Commissioner was concerned to learn the result of a recent study which showed that 24% of the surveyed citizens in Republika Srpska, and 6% in the Federation of Bosnia and Herzegovina approved acts of violence against journalists. “This is unacceptable and the climate in which journalists operate needs to change. I call on the authorities to effectively investigate and prosecute all crimes against journalists. Political leaders are urged to unequivocally condemn all acts of violence targeting journalists who play such a crucial role in ensuring transparency and rule of law.” At the same time, journalists themselves need to strengthen self-regulation, promote ethical journalism, and ensure that professional standards are always abided by.

Finally, the Commissioner underlines Bosnia and Herzegovina’s need for quality, independent, pluralistic and adequately funded public service media. He is seriously concerned that Bosnia and Herzegovina Radio-Television (BHRT) is on the verge of financial collapse. The authorities are urged to find a sustainable funding solution for BHRT and engage in a constructive discussion on the necessary reforms in public service media, thus ensuring pluralism and transparency without which no democratic society can function properly.

The Commissioner’s report on this visit is forthcoming.