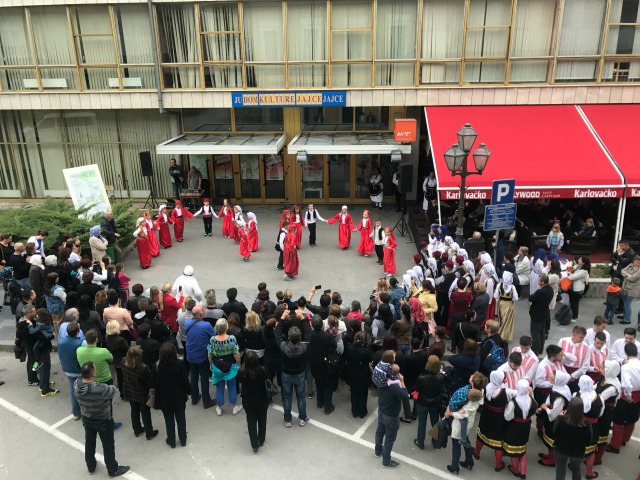 Meet the pupils and teachers fighting against Bosnia and Herzegovina’s deeply divided education system and the segregation it entrenches.

Faruk Bubric, an 18-year old in his last year of secondary school, spends most of his time playing video games or hanging out with his friends.

His time in the education system in the town of Jajce is almost over and he is looking forward to studying philosophy at university in Sarajevo this year.

He attended a Bosniak primary school in the city and graduated in May from an ethnically-mixed secondary school. However, the opening of a new Bosniak school in the city looks set to further entrench ethnic divisions in an already deeply divided state.

Bubric and his classmates are protesting against the opening of the new school – and the ethnic segregation in Jajce’s education that will bring. Currently, his school is mixed but follows the Croat curriculum.

“Ethnicity does not affect me, mostly because I simply do not care about it…we are basically the same …I don’t see a border between Bosniaks, Croats or Serbs,” Bubric says, shrugging his shoulders.

After the wars of the 1990s that marked the collapse of the former Yugoslavia, Bosnia and Herzegovina was divided into two separate entities: the Bosniak-Croat Federation and the Serb-dominated Republika Srpska. Jajce is in the Federation but lies close to the border with Republika Srpska.

While many of Bubric’s generation feel the same as he does, the case remains rare as most of the country’s education system is already divided along ethnic lines. Problems arise in mixed areas where there is no majority ethnicity.

These problems often show up in the education system because according to state-level legislation students have the right to be educated in their own language and to learn literature, history, geography, music, and art according to a curriculum specifically designed for their ethnic group.

If there is not a majority ethnic group, schools typically either create a “two schools under one roof” model, in which Bosniak and Croat students attend the same schools but are kept separate from each other and learn from different textbooks, or they create completely separate schools to divide the ethnic groups.

Amela Kavazbasic, one of Bubric’s secondary school teachers, says the reason for this division is rooted in politics.

“Language is a political question and there is an element of national identity that makes the curriculum a big issue,” Kavazbasic said.

In the former Yugoslavia, the language used by Bosnians, Croats and Serbs was regarded as the same. However, this changed after the wars and the breakup of former Yugoslav republics into independent states, as language was used as a tool to define different ethnicities and the names were changed.

“What about people that are not part of either (dominant) group and do not want to learn under the nation or ethnic curriculums? It is not a solution, it’s really stupid to say that it is justice; I don’t see that as some kind of justice. It is forcing you to decide, like between two opposites, which is really injustice,” says Kavazbasic, flailing her hands around to make her point.

“If we apply the constitution then Serbs have the right to get their curriculum but they don’t have this option and no one thinks about that. They are the minority (in Jajce) so they do not have any rights.”

Kavazbasic along with her fellow teachers organised a survey for students, parents, and teachers in Jajce that asked them for their opinions on the ministry’s decision.

Participants could choose between keeping the current one school under the Croat curriculum, the proposed system with the new Bosniak school, or a third option where a new integrated curriculum is created.

The majority of people voted for the third option.

Students in Jajce are not giving up their demand to stay united in school. At a conference organised by the Nansen Dialogue Centre Sarajevo, held in Jajce from 6 to 8 May and called Building Together, students discussed, among other things, their needs and expectations.

Around 100 students of all ethnic backgrounds from across the country attended the conference in support of the students from Jajce.

“Politicians do not take education seriously. When I look at you… I see people who can bring change,” Nikolas Rimac, a student protestor in Jajce, told the conference.

While the authorities are attempting to split the education system in Jajce against the students’ wishes, in Mostar, a mixed Croat-Bosniak town, students have been brought together in one school but with two curriculums.

In 2004, Mostar merged one Bosniak and one Croat school to form the Mostar Gymnasium, an imperfect attempt to integrate students.

Anika Covic, the director of the school, does not refer to her school as “two schools under one roof” but rather “one legal subject with two separate programmes”. The students have joint IT and French classes, a shared student council, extracurricular activities, and schedules but they also study their own ethnic curriculums.

This school is located in the same building as the United World College, UWC, an international school that aims to overcome divisions. The school in Mostar is one of 17 schools across the globe run by the UWC movement.

This movement was founded in 1962 with the aim of overcoming Cold War divisions by selecting scholarship students from around the world to live and learn together. Out of the 200 students who attend the school, 60 are from across Bosnia.

UWC Mostar is a way for “students from Bosnia to learn a lot about other cultures… for everyone it is an opportunity to see their own country from a different angle”, says headmistress Valentina Mindoljevic. It is a successful example of integration and minimalizing division.

This is in clear contrast to not only the semi-split gymnasium that shares its premises but also to the wishes of most Bosnian ethnic leaders. While there was support at the gymnasium and among local Mostar politicians, nothing is being done to end divisions in education across Bosnia.

“So what (politicians) do now is they want to take control… it is far less possible to manipulate young people if they are together,” says Kavazbasic.

Students in Jajce, Mostar and across Bosnia have found support from various non-governmental organisations.

Humanity in Action, a Sarajevo-based NGO, runs a programme called Encouraging Democratic Values and Active Citizenship Among Youth, EDVACAY. This programme targets students in their first and second year of university from across Bosnia for civic and academic training.

“What we do in one year is take kids who have no experience in local governance, no experience whatsoever with the local community or other legal entities whatsoever and turn them into raging activists,” says Jasmin Hasic, the executive director of Humanity in Action.

According to Hasic, the programme was established “because kids remain separated, there are different schools, they don’t know what’s going on in different communities”.

The current education system is lacking diversity, through the pupils, administration, and the curriculum but non-formal education allows for critical thinking to develop and an “opportunity for young people to explore something beyond what’s… in their textbooks”, says EDVACAY project coordinator Maida Omercehajic.

Bosnia's Youth Initiative for Human Rights, YIHR, is a Sarajevo-based NGO that helps young people deal with the past, especially the most recent war. They offer a summer camp where they teach youth aged 18 to 30 about transitional justice, EU integration and constitutional reform.

“I love that school because at the end I can always see the change, you don’t have it on paper but you can see it, you have something that really is important,” says Beti Colak, a past participant of the summer school and former employee of YIHR’s Sarajevo office.

She is still in daily contact with friends she made during her time there.

“Most people who finish the school remain activists,” she notes, amid various calls, texts and visits from her friends.

Programmes like Humanity in Action and YIHR are allowing students to interact with each other from all over Bosnia while learning how to impact and change their society and political system.

Youth are growing up in a country where they are taught division is normal but towns like Jajce and NGOs like Humanity in Action and YIHR are standing against this and asking for a common curriculum.

Kavazbasic says she will keep fighting for integration and believes others should follow suit.

“I think it is our duty, if we are people who care for peace, life, tolerance, and good human values that everyone needs, to rise against this divided educational system. I think it’s one of the biggest problems in our society.”

Katherine Heroux is an alumni of the SIT Study Abroad Program Serbia, Bosnia and Kosovo: Peace and Conflict Studies in the Balkans. This story was written as an Independent Study Project in Journalism.