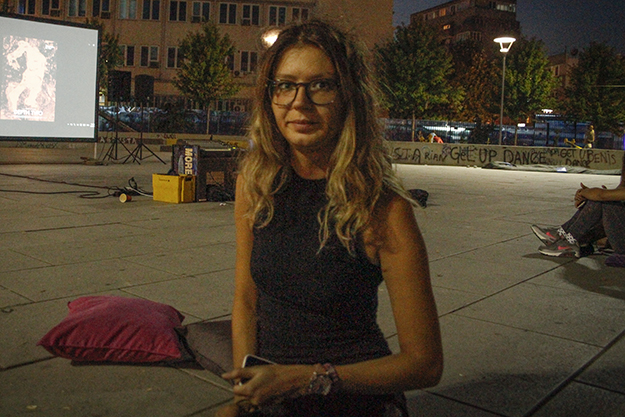 A documentary screening and unveiling of a poignant installation marked the International Day of the Victims of Enforced Disappearance in Prishtina on Tuesday.

On Tuesday (August 30), the International Day of the Victims of Enforced Disappearances, a powerful documentary recounting some of the atrocities committed by Slobodan Milosevic’s regime in Kosovo was shown in the center of Prishtina. Families of missing persons, human rights activists and other citizens gathered in the Zahir Pajaziti amphitheatre for a special screening of Serb director Ognjen Glavonic’s “Depth Two.”

An installation with the names of the 116 children still missing from the Kosovo war was unveiled in Prishtina on Tuesday evening. (Photo: Fikret Ahmeti / K2.0)

The documentary was screened as part of Youth Initiative for Human Rights (YIHR) activities as the organization sent a clear message to Kosovar authorities: The prolonged agony experienced by the families of the approximately 1,665 persons still missing from the war in Kosovo needs to end and that government inertia is taking the opportunity to mourn their loved ones away from victims’ families. After the documentary, ‘The Box of Mourning’ (‘Kutia e Zise’), a black box with the names of the 116 children who have never been located after being disappeared by force during the Kosovo war, was lit up as a poignant installation.

A truck filled with the bodies of children, old people, women and men is lifted from the Danube river; Shyhrete Berisha tells the horrifying events of the massacre of the Berisha family by Serbian forces; the bodies of Kosovar Albanians are taken from their initial graves to be transported and plunged into the river near Serbia’s border with Romania; perpetrators tell how Milosevic’s regime organized a detailed logistics operation to cover up the atrocities — in 2001 mass graves containing the remains of more than 700 war victims were uncovered on Serbian Ministry of Interior land at Batajnica, near Belgrade.

Using voiceover testimonies of victims and perpetrators from trials at the International Criminal Tribunal for the former Yugoslavia (ICTY), “Depth Two” reconstructs some of the horrific events that took place during the 1999 NATO bombing in Kosovo and Serbia. Without using footage from the time, voiceovers are visually paired with present-day images from the locations of the crimes — blurry river and lifeless streets, houses, trees and grass — that feed the tone and atmosphere and enable the audience to create their own imagery and judgement of the atrocities.

“We think that the topic addressed in this movie is something very important to be shown, not only in Kosovo, but everywhere, particularly in Serbia,” YIHR’s Acting Director Teuta Hoxha told K2.0. “Being in contact with young people we noticed that they don’t have a lot of information about what happened during the war, they don’t have information about what happened, not only against their own community, but against all communities in Kosovo … in particular they don’t know about the existence of the mass grave in Batajnica that was 20km from Belgrade.”

YIHR's Acting Director Teuta Hoxha stresses the need for young people in particular to have more information about what happened during the war in Kosovo. (Photo: Fikret Ahmeti / K2.0)

On Monday, YIHR sent a small black box to the Kosovo Prime Minister’s Office. It contained a pair of children’s shoes, a letter and a list of the names of missing persons from the war. “While being persistent in realizing the rights of victims’ families in particular, and society in general, as activists through symbolic actions we continue to raise attention about the issue of missing persons relying on Article 5 of the Law on Missing Persons, which states that the families have the right to know about the fate of their missing family members,” reads the letter.

Hoxha explained that the aim of the action was also to express concern that Kosovar representatives have failed to raise the issue of missing persons as part of the EU-facilitated Serbia-Kosovo dialogue, despite promises made to victims’ families.

At the end of the war, it was estimated that more than 5,000 people were missing. That number has decreased over the years, in part due to the steady uncovering of mass graves — bodies of hundreds of Kosovar Albanians were transferred to Serbia by Serbian forces and buried in mass graves as a way of hiding the evidence of atrocities.

To date, the bodies of more than 950 Kosovar Albanians who were “disappeared” by Serb forces have been exhumed in Serbia. A mass grave in the village of Petrovo Selo in Vojvodina, northern Serbia, was found to contain the remains of 70 victims, while the remains of 84 people were found in Lake Perucac in western Serbia. The most recent discovery was a mass grave at the Rudnica quarry near the southern Serbian town of Raska, where the remains of 55 people were exhumed. Other mass graves have also been located within Kosovo. However, the largest mass graves uncovered were those at Batajnica.

“The first step toward peace and reconciliation is documenting the facts that happened during the war … in the case of Kosovo, documenting what happened during and after the war,” said Hoxha. “We are a generation that experienced the war, but some of us were very young at that time, maybe we don’t remember the war, but as citizens we have the right to know the consequences. It is not just a burden for the families [of missing persons], it needs to be shared by all citizens, by all young people, in order to know what happened in the past so that we can have a secure and peaceful future.”

Around 1,665 people are still missing from the war in Kosovo.

On March 26, 1999, Serb police officers from the Suhareka Police Department killed 48 Kosovar Albanians in Suhareka — 46 of whom were from the Berisha family documented in “Depth Two.” The victims included children, a pregnant woman and a 100-year-old; the remains of 23 of those killed were found in the Batajnica mass graves. Shyhrete Berisha’s son Altin is one of the missing children whose name is lit up on the ‘Box of Mourning’ installation.

In March this year, on the 17th anniversary of the Suhareka massacre human rights activists in Serbia, marched from downtown Belgrade to the suburb of Batajnica. Led by the YIHR office in Belgrade, they aimed to raise awareness of the existence of the mass graves and the failure to prosecute the perpetrators. Although the ICTY prosecuted some of the senior officials involved in the Suhareka massacre, no one has been prosecuted in Serbia for the operation to remove bodies.

“Depth Two” has been strongly backed by The Humanitarian Law Center, which helped to produce the documentary as part of its “Batajnica Memory Initiative.” Currently operating only in virtual space through the film and a website, the project ultimately aims to establish a physical memorial on the site of the Batajnica mass graves that will stand as monument to the victims and to the truth about the atrocities.

“I think we should point the camera to ourselves and not always to another,” “Depth Two” director Ognjen Glavonic said following the documentary’s premiere at the Berlinale film festival earlier this year. “Every nation tries to victimize themselves and our countries are based not on myths but mythomania … something I like personally to fight against with this film — against the lie that was being shown as a truth.”